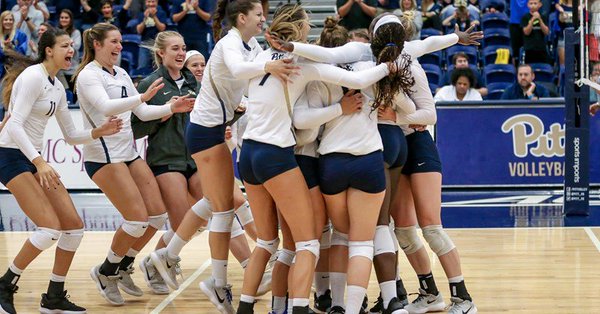 13th-ranked Pittsburgh swept past 12th-ranked Washington to close Panther Invitational action Saturday and remain undefeated, 9-0, on the season. The Huskies recovered from the loss with a 4-set victory over Kennesaw State in the evening. Current Photo via Pittsburgh Athletics

13th-ranked Pittsburgh swept past 12th-ranked Washington to close Panther Invitational action Saturday and remain undefeated, 9-0, on the season. The Huskies recovered from the loss with a 4-set victory over Kennesaw State in the evening.

13th-ranked Pittsburgh used a .425 attack percentage and 7 to 3 blocking edge to silence 12th-ranked Washington and remain undefeated on the season, 9-0, with a Saturday sweep. The Panthers finish their invitational with a 3-0 mark to claim the championship and are off to their best start to a season since 2006.

Five ties occurred early in the first set before the Panthers used a 7-1 stretch to establish a 6-point advantage at 19-13. Pittsburgh held on from there, registering a 25-18 win.

In the second set, Pittsburgh used several scoring drives to secure a dominant 25-13 victory. The teams fought through five early ties in the third set until the Panthers went on a 10-3 run to gain control. Pittsburgh did not let up from there, notching the sweep with a 25-17 win.

After dropping the first match of the day to 13th-ranked Pittsburgh, 12th-ranked Washington rebounded with a 3-1 victory over Kennesaw State to cap Panther Invitational play. The Huskies finish the weekend with a 2-1 record.

The Dawgs get it done in four sets!#PointHuskies // #GoHuskies pic.twitter.com/RC47hKZ8uC

Kennesaw State came out of the gate strong, establishing a 5-1 lead early in the first set. Washington fought back through 3 ties, however, the Owls used a 9-1 run to key their 25-19 win.

The teams battled back and forth through 8 ties in the second set before the Huskies secured the 27-25 win with an Owl error and kill by freshman Shannon Crenshaw.

Washington came out firing in the third set, jumping ahead 5-1. After Kennesaw State registered 5-straight scores to tie it up, 9-9, the Huskies responded with an 8-2 stretch to regain control. They held on to the momentum from there and secured a 25-19 win.

The Huskies came out on top, 25-20, in another hotly contested set to register the 3-1 result.