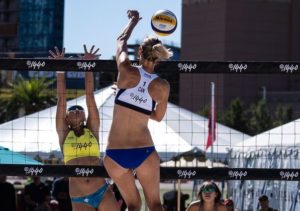 Women’s pool play continues on Friday with all 32 teams in action. First up, beginning at noon ET are the pool title matches, including three American pairs. Mens action begins at 2:30 p.m. ET. 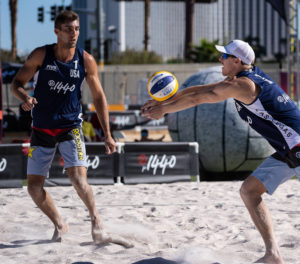 Top seeded Americans Taylor Crabb/Jake Gibb and No. 19 Trevor Crabb/Tri Bourne are among eight pool title winners to earn a free pass to the second elimination round. Qualifiers Crabb/Bourne knocked off No. 3 Pablo Herrera/Adrian Gavira in straight sets to claim Pool C.

Four American men’s pairs and three United States women’s duos were among those the eight teams per gender that moved through qualifying into the p1440/FIVB Las Vegas Four Star on Wednesday.

From the crowds, to the competition field to all of the surrounding elements that make P1440 unique, founder Kerri Walsh Jennings sat down with VolleyMob to take a look back at the beach volleyball tour, health and wellness fair and concert series’ opening stop at the San Jose Invitational.

The on-court competition field is set, the live musical lineup is ready to take the stage and the health, wellness, training and activity slate is packed with opportunities for engagement at the San Jose Invitational, the opening stop on three-time Olympian Kerri Walsh Jennings’ P1440 Tour.

Three-time Olympic gold medalist Kerri Walsh Jennings is partnering up with fellow American Brooke Sweat for the P1440/FIVB co-sponsored four-star event in Las Vegas in October. Sweat is returning to the court after rotator cuff surgery.