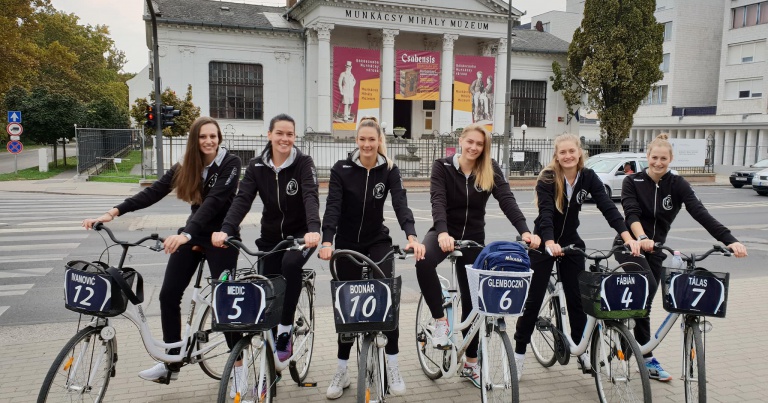 Hungary has the third most daily bike users of any nation in the European Union, after the Netherlands and Denmark. It is also the EU country that least relies on cars for transport. Current Photo via Brse.hu

Five-time Hungarian champions Bekescsabai Roplabda celebrated European Mobility Week with style by having its players participate in the event’s Car-Free Day initiative this week. The event aimed to raise awareness to environmental consciousness and popularise bike usage and walking. The club’s president Adam Baran talked about his team’s participation in the campaign:

“The club started this campaign in the 2015/2016 season when supporters could purchase for team members and for the staff unique bikes with the names of the players and their jersey number on them. This initiative was a huge success, in a short period of time several entrepreneurs and partners came forward and stood by this excellent cause, as they saw potential in this idea and they supported the club as much as they could. The written media reported on this action as well.”

The club’s players were likewise very excited with the experience:

“I played in many countries during my career but this initiative of the club is very unique all around Europe. They are very committed when the popularisation of sustainable development and a healthy lifestyle is at stake, thus they happily take part in such events. It is well known that we use bikes in our town.” – Ksenija Ivanovic

“We hope that we can popularise the importance of cycling and we can get the youth’s attention through this action. I personally hope that more and more people in Békéscsaba and all around Hungary will use their bikes in their everyday life to prevent health issues. The purpose of the Car-Free Day is to raise people’s awareness that it is not necessary to go everywhere by car.” –  Zsuzsanna Tálas

According to a survey done by Eubarometer, Hungary has the third most daily bike users of any nation in the European Union, after the Netherlands and Denmark. It is also the EU country that least relies on cars for transport.

Bekescsabai Roplabda is the current Bekescsabai MEZVA Cup 2-time winner. It was home to the former Utah Valley University Wolverines star Sarah Clement during the 2015/16 – 2016/17 seasons, the only American player to have played at the club so far.