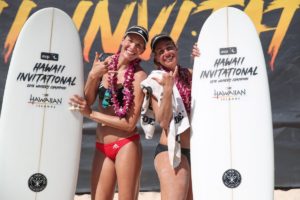 Americans April Ross/Alix Klineman and Phil Dalhausser/Nick Lucena wrapped up the 2018 AVP season with first place finishes at the Hawaii Invitational, for the $20,000 top prize and the fourth AVP crown of the year for both duos.

The semifinals are set for the Hawaii Invitational with three American pairs joining Brazilians Agatha/Duda on the women’s side. Brazilians Saymon/Guto and Dutch pair Brouwer Meeuwsen along with Dalhausser/Lucena and Bourne/Grabb will vie for the men’s title. 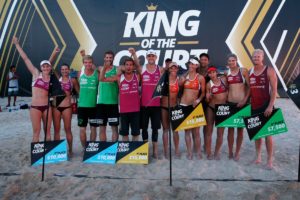 The AVP Hawaii Invitational, the final stop on the 2018 tour, is just days away and the field has been set. Eight teams per gender, including both reigning FIVB World Tour Finals champs, with vie for the title in the double-elimination two-day affair. 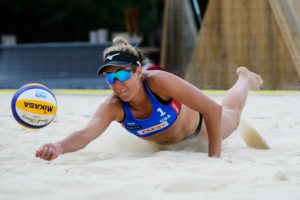 The Southern California Indoor Volleyball Hall of Fame (SCIVBHOF) has announced its final group of 27 nominees, consisting of players and coaches that range from the 1940s to the 2000s, for 15 induction spots for the 2019 class.

The men fought hard to reach the title match with both semifinal matches going to tiebreak. In the end, it was No. 2 seed Taylor Crabb/Jake Gibb that won the @AVP Gold Series Championships in Chicago, their first title since winning AVP Seattle in June.

Still In It: Sponcil/Cannon Go From Qualifiers to AVP Chicago Semis

As the sun set on Chicago Saturday night, the semifinals field was set for the AVP Gold Series Championships, though the day was ripe with upsets in the contender’s bracket, with No. 18 Terese Cannon/Sarah Sponcil making it all the way back to the semis through five matches.

Opening day in the main draw the AVP Championships in Chicago was riddled with upsets and saw ninth-seeded Tim Bomgren/Chaim Schalk and No. 10 Brittany Howard/Kelly Reeves advance to the winner’s bracket final four.

Sixty-four men’s teams and 36 women’s faced off in Thursday’s qualifying bracket trying to earn a spot in the AVP Chicago main draw. At the end of the day, Sarah Sponcil/Terese Cannon moved on in their first tournament together and Bruno Amorim/Skylar del Sol were the lone men’s team to make it through in straight sets.

An Inside Look at AVP Chicago

AVP Chicago will see 124 teams, including qualifiers, compete on the last stop on the three-event gold series, which features increased points and a $250,000 prize purse.

Phil Dalhausser shared video of the gold medal point at the 2008 Olympics, which came 10 years ago today. VolleyMob looks back at Dalhausser’s continued success and career since that day.

Former partners Brittany Hochevar and Emily Day, who have won the last two Manhattan Beach Open titles together, will be on opposite sides of the court with another title shot on the line on Sunday. Meanwhile, No. 6 Jeremy Casebeer/Reid Priddy crashed the men’s final four playing through the contender’s bracket.

Friday’s AVP Manhattan Beach Open slate marked the return of Tri Bourne, after an 18-month battle with an autoimmune disorder, and also saw the top three seeds in the men’s and women’s brackets stay alive in the winner’s bracket. The No. 5 seeds on both sides also picked up three wins each.

Eight men’s teams and eight women’s teams played their way through qualifying en route to spots in the main draw of the AVP Manhattan Beach Open on Thursday.