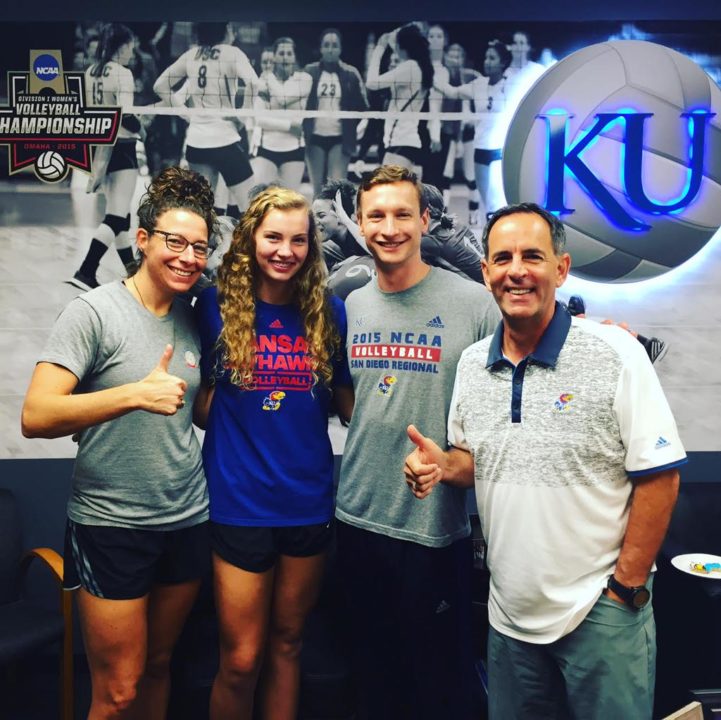 2019 right side Rachel Hickman won't venture too far from home as she will attend Kansas following her prep career. Archive Photo via Bryon Larson & Dynasty Volleyball

“I kind of wanted to go on my own path.” Those were the words of class of 2019 recruit Rachel Hickman, a University of Kansas commit who had to make the difficult decision of not playing collegiate volleyball with her sister Naomi Hickman, a freshman at Creighton.

An attendee of Lawrence Free State High School in Kansas, Rachel played with her sister for the Firebirds, even making the Kansas 6A State Tournament for the first time ‘in a really long time’ per Hickman. With as close as the two were, her sister’s commitment to the BlueJays (where she currently is attending as a 6’4″ freshman middle blocker who has played in 44 of the team’s 46 sets) helped put Creighton in Rachel’s top five, along with Iowa, Kansas State, Nebraska and Kansas.

“We did everything together. We fed off of each other and pushed each other to be better,” Rachel Hickman told VolleyMob. “I actually considered Creighton for awhile in my search. I decided I didn’t really want to be known as Naomi’s little sister because that was what I was known as when she was at Free State with me.”

The decision to go to Kansas was ultimately made in 2016, as now the 6’3″ left-handed hitting right side is in her junior year with Lawrence Free State in addition to her endeavors with Dynasty Volleyball on the club side. With the decision, she will get to stick around Lawrence come 2019.

Of course, Kansas and Creighton have more ties than in recruiting these two sisters. With about a three hour drive separating the pair, non-conference meetings have occurred over the years in addition to NCAA Tournament matches. Recently, Kansas defeated Creighton in the 2013 second round while last year’s round of 32 went to Creighton. Just a few weeks back, the two sides met again in Lawrence as Rachel and her team at Lawrence Free State got to attend as Naomi was announced in the starting lineup.

“It was a pretty special moment when they announced for Naomi and Rachel got a little teary eyed from it,” Lawrence Free State head volleyball coach Keely Hammontree said in an interview with VolleyMob. “She was all red-faced and excited for her sister and beaming with pride.”

While Rachel was ecstatic to see her sister play in a ranked Division I Women’s Volleyball match, she knows that one day the two could actually go toe-to-toe. Knowing that the two sides have met pretty regularly, Rachel talked about what it would be like to see her sister Naomi in a match from the other side of the net.

“It’ll be a pretty important moment,” Rachel Hickman added. “Seeing how hard both of us have worked to get to where we are and both of us being able to play on the big stage would be very cool.”

Hickman still has two more prep years to complete before she joins the Kansas volleyball team. That should coincide right when they will need an opposite as All-American Kelsie Payne graduates this year with Gabby Simpson potentially filling the void for one season in 2018. It won’t be the first time she steps into a big role either, something she is experiencing this season with her sister graduating from Lawrence Free State.

“There’s definitely a bigger role for me to fill because we lost I think nine seniors last year,” Hickman said. “It’s definitely been a step up this year just trying to fill in those big shoes.”

Hickman’s head coach at Lawrence Free State, Hammontree, also talked about Hickman’s new role as a junior on the Firebirds with her sister Naomi off to college in Omaha, Nebraska.

“This year her court presence and her communication with her teammates has significantly improved,” Hammontree noted. “Her role has also doubled in the fact that she was only a two rotation hitter and now she plays all the way around for us. She looks like she’s enjoying it.”

In terms of what the Jayhawks will be getting on the court come 2019, Hammontree also discussed Hickman’s game as being someone who should fit right into the Kansas up-tempo offense.

“She’s a vocal leader. She is somebody her team can rely on in those pressure situations,” Hammontree told VolleyMob. “She’s a go-to player when we’re needing a play executed or an offensive option.”

While Rachel will be forging a separate path from her sister by attending Kansas in a few years, the bond of the two goes beyond just volleyball. They’ll always have their memories together at Lawrence Free State as now the pair makes their own individual memories on their own respected journeys.

“I think they really enjoyed playing with each other,” Hammontree said. “There was always a sense of sisterhood there before volleyball.”