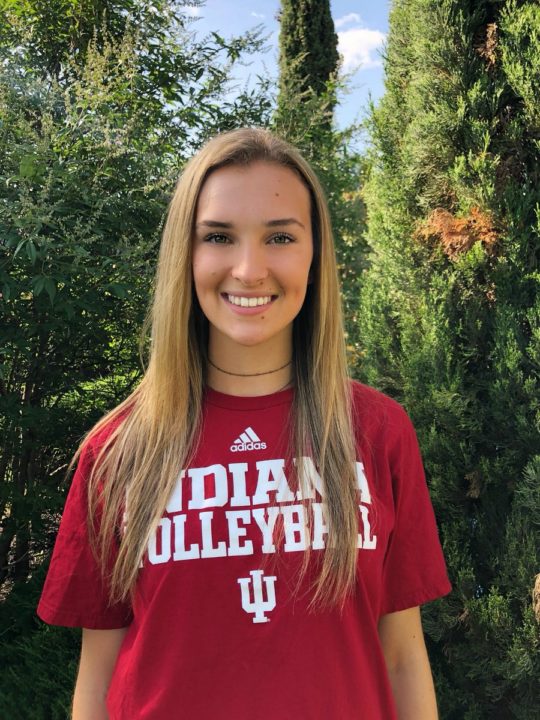 Class of 2020 recruit Savannah Kjolhede has verbally committed to the Indiana University women’s volleyball program. Kjolhede is a 6’2″ middle blocker and opposite, who would be a freshman for the fall of 2020 season.

According to a story written in the Star Telegram about Kjolhede last season, she had received interest from TCU, Michigan, Michigan State, Pepperdine and Hawaii.

Video of some of Kjolhede’s play (#15 in white) can be seen below via her YouTube channel:

The proof is in the pudding that new head coach Steve Aird is already striking hard on the recruiting trail – exactly what he did previously at Maryland. It’s the second class of 2020 commit registered in the VolleyMob Recruiting Database for Indiana, as Kjolhede joins DS/L Madyson Chitty. In terms of future recruits in 2020 or beyond, they also combine with 2021 S/RS/OH Camryn Haworth.

Indiana is coming off of a 12-20 season in which they went 1-19 playing in the Big Ten. None of their returning middle blockers and opposites will be on pace to have eligibility by the time that Kjolhede arrives.

i’m extremely blessed to announce my verbal commitment to Indiana University to continue my volleyball and academic career, and a huge thank you to all of my coaches, teammates, and family for getting me to where I am today. Go Hoosiers!!! pic.twitter.com/zYzJc3CI3k