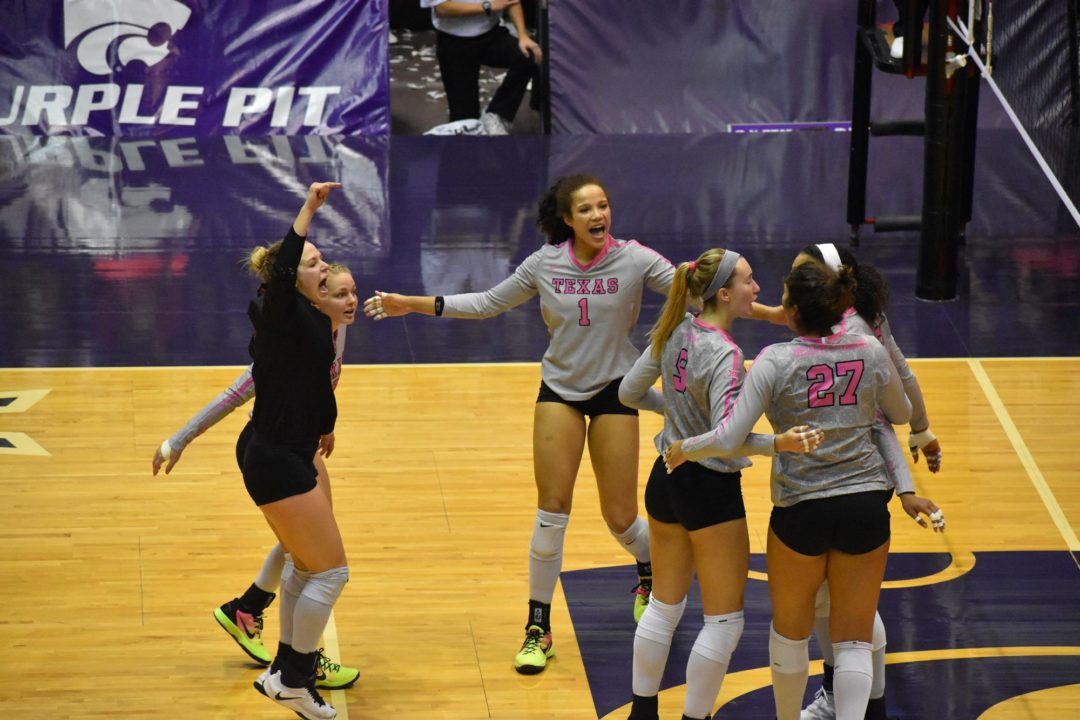 Manhattan, Kansas – The Big 12 record remains perfect at 10-0 now for Texas, but things weren’t so clean for the match as the Longhorns overcame a 2-0 set deficit and a three-point Kansas State lead in the fifth to come back for a win. The victory is of vital importance for Texas, who could have made the Big 12 title race that much closer by getting tripped up on the road, but instead keep their two plus-match difference.

Kansas State jumped out to that lead with a strong first set and a late push right when Texas tightened things up. They followed it with a closer set win at 26-24 behind the strength of Kylee Zumach (19 kills, 10 digs) and Bryna Vogel (11 kills, .290, 19 digs), as the Wildcats went from losing a 24-21 lead, to winning the last two of the game.

Things turned in the third set for Texas as they played well seemingly throughout to get on the board in sets. That only continued in the fourth as Ashley Shook (55 assists, 11 digs, seven kills, .462, four blocks) was able to distribute kill after kill to some of her top options like Micaya White (17 kills, .220, 17 digs, four blocks, two aces). That was the most lopsided of the sets at 25-15 to force a fifth.

In that fifth, Kansas State jumped ahead 8-5 at the switch. Texas responded once more and held strong defensively behind libero Cat McCoy (25 digs), who broke the school record for most career digs in the match. Defense continued to be a calling card as the Longhorns used a few blocks and strong digs to zoom in front and end things with a Chiaka Ogbogu (eight kills, 11 blocks) and Yaazie Bedart-Ghani (10 kills, .350, three blocks) block.

Texas now heads back home to Austin to face Texas Tech on Saturday and complete their week. Kansas State on the other hand has a week off before another Wednesday night match with a highly-ranked Big 12 foe as they visit Kansas.

McCoy’s 25 digs gave her 1,639 for her career to pass Demetria Sance, one of three four-time All-Americans in Texas’ rich history. Sance originally set the record in 1998 with 1,614 digs in an era that featured rally scoring.

Sophomore Micaya White led Texas in kills with 17, hitting .220, also registering a season-high 17 digs for her fourth double-double of the season.

Freshman Ashley Shook recorded her eighth double-double of the season with 55 assists and 11 digs, while sophomore Claire Hahn tied her season-high mark with 14 digs.

Senior Chiaka Ogbogu led Texas to a 14.0-6.5 block advantage, tying her career-high mark with 11. White and Shook added four blocks for the Longhorns. UT also finished with a .259 to .210 hitting advantage.

The match opened with a hot start for the Wildcats, with the home team possessing an 8-6 lead when McCoy recorded her record-breaking dig. Kansas State’s advantage grew to as many as six at 8-14 and again at 10-16 before a Texas timeout, and the Longhorns were unable to recover despite twice narrowing the gap to one. After a White kill for 20-21, Kansas State closed out the set at 21-25.

Though White led Texas with seven kills (.429) for the match early in the second set, the Longhorns again trailed, 10-7 before the Wildcats extended to a 20-16 advantage. Falling behind by as many as seven, Texas came back within one at 20-21 with a White service ace. But despite the late rally, Kansas State moved to 2-0 at 26-25 after four set points.

The third set started 4-4, but with the Longhorns developing a first three-point advantage for the match on a service ace from Ogbogu for 7-4. Maintaining the lead as Kansas State called timeout at 14-11, Texas gained decisive momentum on three-consecutive kills from Sun to push the lead to eight at 21-13, taking a first set for the match at 25-18.

Ending the third set on an 11-7 run, momentum began to show again for the Longhorns in the fourth. After tied scores at eight apiece, Texas took control at the net, registering six blocks to fuel a ten point advantage at 21-11. After extending to set point at 24-15, Texas tied the match score at 2-2 on Sun’s 13th kill.

Falling behind 7-4 starting the fifth set, Texas rallied to tie at 8-8 before kills from Sun and Johnson took the Longhorns ahead at 9-8 and then 10-9. Bedart-Ghani’s 10th kill on the match gave Texas a two-point lead at 12-10 and the room to move to match point at 14-11, before the junior had a hand in a key block with Ogbogu to secure the match at 15-11, with a 3-2 match score.

Texas will return home on Saturday, Nov. 4 to host Texas Tech at 2 p.m. CT. The match will be televised live on Longhorn Network.