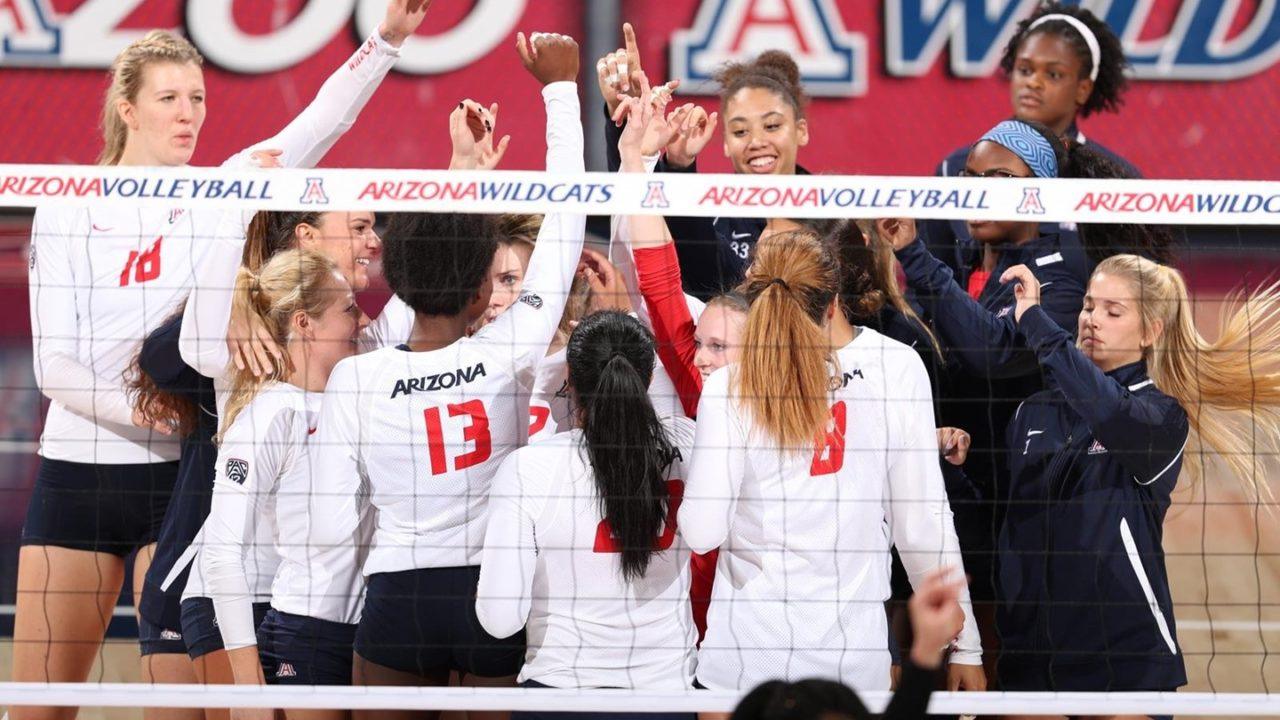 Tempe, Arizona – In a rivalry match that kicked off their Pac-12 season, Arizona took down Arizona State in straight sets as they totaled 17 points from blocks and aces in the match.

It was the little things in set one that pushed the Wildcats ahead, as they logged a trio of aces and blocks while Arizona State got none. That was the difference in an opening set that featured nine ties and three lead changes and would create a theme for the rest of the match as Arizona out-aced Arizona State 7-0 while out-blocking them 10-4. Jade Turner (six blocks) and Elizabeth Shelton (five blocks) led the front-line defense while Julia Patterson, Kimberly Gutierrez and Sara Watanabe each had a pair of aces.

In set two, Arizona led from first point to set point and then would never relinquish the lead in set three, only seeing two ties after the 0-0 opening line. Kendra Dahlke led the way for Arizona with 12 kills and nine digs, both team-highs, while Turner added 11 kills to her block total.

Arizona State would hit .236 for the match, only a slight difference from Arizona’s .241 even though the match was a sweep. Ivana Jeremic led everyone with 14 kills and did so hitting .270 while Megan Beedie notched nine kills on a .750 effort. However, at the end of the day it was the aces and the blocks that did the Sun Devils in.

Arizona looks to build off the strong start and take out a team ‘on the cusp’ in the latest VolleyMob Top 25 as they will see Washington State on Sunday in Tucson. Arizona State meanwhile looks to bounce back with a tough test against #7 Washington as they stay at home.

“That was a good one to win,” said head coach Dave Rubio, whose Wildcats improved 7-3, 1-0 Pac-12 on the season. “It’s tough to win on the road, especially up here. It’s always good to beat ASU.”

The victory was UA’s first in Tempe since the 2014 season and broke a streak of four straight matchups between the two teams won by the home team.

Jade Turner recorded a career-high 11 kills on .381 hitting and put down a team-high six blocks. UA had 10 as a team, marking the ninth match in 10 tries in which UA eclipsed the double-digit block mark as a team.

In addition to dominating the match at the net, the difference may have come from the service line. Arizona had a season-high seven service aces — including two apiece from Julia Patterson, Kimberly Gutierrez and Makenna Martin — while committing just one service error. ASU (10-3, 0-1 Pac-12) had no aces to go along with five errors.

“I told the team before the match that the winner would be the team that served the best,” said Rubio. “I thought we were aggressive early and it really helped our confidence throughout the match. We won the match tonight because of the way we served.”

Kendra Dahlke led the Wildcats with 12 kills and finished one dig shy of her third double-double of the season.

Jade Turner had three kills on seven swings to go along with three blocks while Julia Patterson dished out a dozen dimes and served two aces to help Arizona win a closely contested first set, 26-24. UA failed to convert a pair of set points, up 24-22, but scored the final two points of the set to win it.

In the second, UA led wire-to-wire, getting started with a 3-0 Tyler Spriggs run to kick it off and never looking back. UA hit .314 and recorded five blocks to dominate the set, 25-18.

Dahlke had five kills in the third set to help Arizona finish off the match in straight sets, 25-22.

Up Next: The Wildcats return home to host Washington State on Saturday at 6 p.m. MST to conclude week 1 of Pac-12 play.

“Before the match I talked about how the serve-receive was going to be the key for tonight’s match, but we did not pass well and we did not serve well so I’m not surprised with the outcome of the match,” said head coach Sanja Tomasevic.

Sophomore Ivana Jeremic led the Sun Devils with 14 kills. Freshman Megan Beedie recorded her second career start for ASU and added a career high nine kills on .750 attacking. Beedie also had two solo blocks and one block assist on the match, another career high for the newcomer.

Senior transfer Isabel Miller added a career high five kills on .417 attacking off the bench in the third set.

Senior Halle Harker had 21 digs on the match, now with 1,654 career digs to her name. Her mark remains the third-best in program history. Sophomore Nicole Peterson and Shelbie Dobmeier split time at setter, recording 27 and 13 assists, respectively.

For Arizona, Kendra Dahlke led with 12 kills while Jade Turner added 11 on .381 attacking.

Up next, the Sun Devils stay home to continue Pac-12 play against the No. 7 Washington Huskies (10-1) on Sunday at 1 p.m. PT. The match will be broadcasted live on the Pac-12 Network as Darren Sutton and Al Scates remain on the call.