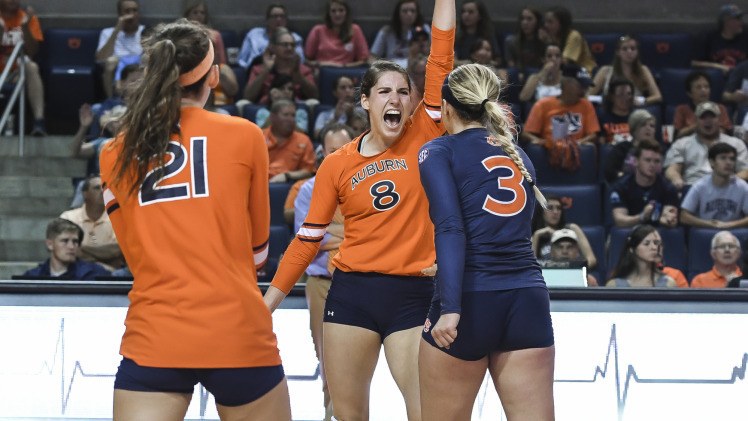 We start with McIlroy, a junior from Garland, Texas, who in one match for the week logged 17 kills and 17 digs. That was key in an Auburn win over South Carolina as McIlroy averaged 4.25 kills and digs per set for the match in helping the Tigers snap a five-match losing streak.

Moving to the defensive end, Florida’s Rhamat Alhassan and Missouri’s Alyssa Munlyn share the latest SEC Defensive Player of the Week honors. Alhassan averaged 2.40 blocks per set in a one-match week for the Gators while Munlyn also cleared the two blocks per set mark for the week as the Tigers won a pair of road matches.

The Setter of the Week was Arkansas sophomore Rachel Rippee, who totaled 12.11 assists per set in two matches last week. The second of the two was a victory as the Razorbacks came back to win in five sets over Ole Miss with Rippee posted 59 assists in the match.

Rounding out the award winners is another Rachel in Georgia’s Rachel Ritchie, the SEC Freshman of the Week. In two matches, Ritchie netted 32 kills (4.00 per set) in a win over Arkansas and another match coming against Missouri and the defense of Munlyn.