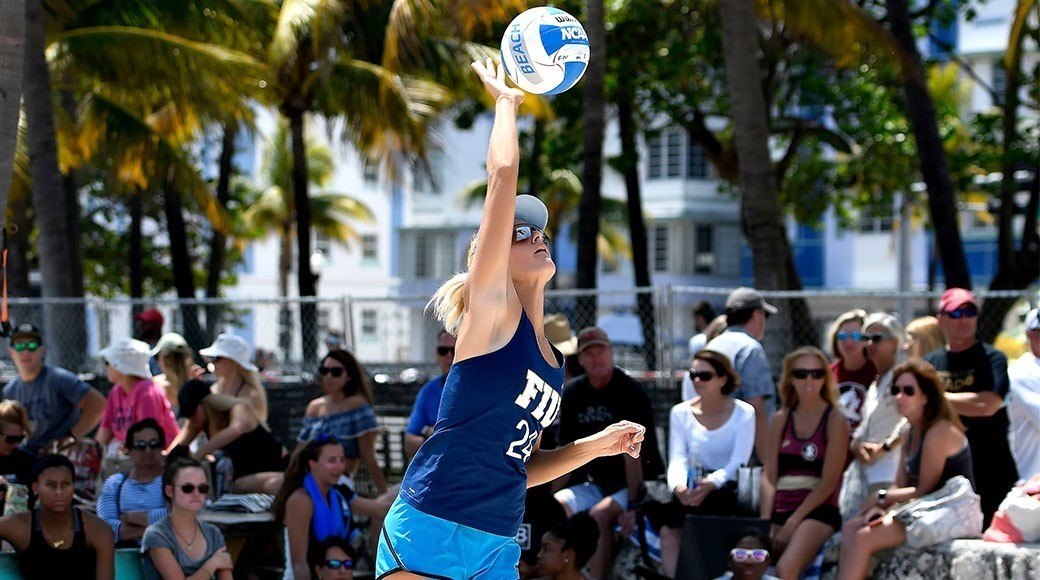 We're revisiting last week's NCAA Beach Volleyball Tournament invite and seeding predictions, factoring in the results of last weekend's slate of matches. Florida International is on the move after wins over tourney hopefuls Stetson and Grand Canyon, while Stetson went 2-3 over the weekend, putting its projected tournament bid in precarious position. Archive Photo via FIU Athletics

We’re revisiting last week’s NCAA Beach Volleyball Tournament invite and seeding projections, factoring in the results of last weekend’s slate of matches. Florida International is on the move after wins over tourney hopefuls Stetson and Grand Canyon, while Stetson went 2-3 over the weekend, putting its projected tournament bid in precarious position.

UCLA and USC didn’t play, but Pepperdine further secured the #2 spot in the West by handing Florida State its first home loss ever. Pepperdine did split with FSU over the weekend, but that loss comes outside the West and doesn’t matter for regional berths.

Stetson went into free fall in the AVCA rankings, dropping from 9th to 13th and watching three East teams leapfrog them: #9 Georgia State, #10 Florida International and #12 South Carolina. But despite losses last weekend to FIU, Grand Canyon and Pepperdine, Stetson still has a 17-5 record in the east that tops all three of the closest challengers for the third spot.

Florida International had the biggest win of the weekend, topping Stetson 3-2. FIU also pulled both Florida State and Pepperdine to tight 2-3 matches. Keep an eye on the Panthers, who could make a late run to a tourney bid with CCSA Tournament matches coming up against South Carolina and FSU.

Long Beach State and Hawaii have done exactly what they needed to, beating beatable teams. FIU is the team on the rise after beating GCU and Stetson. They could make at at-large bid or even a regional bid if they play well against South Carolina and FSU in the CCSA Tournament.

Grand Canyon doesn’t really have a signature win and has lost 5 of their last 6, with the lone win coming against another falling team, Stetson.

There aren’t many matches left that could significantly shake up these projections, but here are the remaining impact matches for teams in the tournament mix:

(This week’s matchups listed in bold)