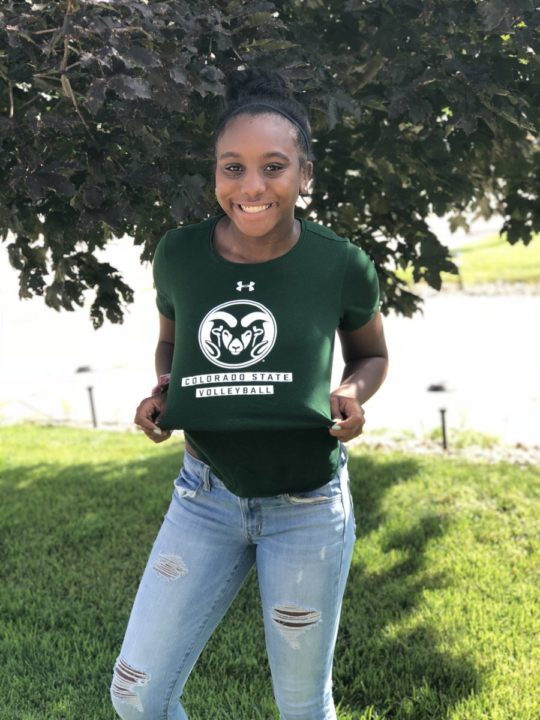 Class of 2019 pin Morgan Browne has committed to an in-state school in Colorado State. Archive Photo via Morgan Browne (@Mobrowne1305)

Class of 2019 outside hitter/right side Morgan Browne has committed to the Colorado State University women’s volleyball program.

Browne is a senior at Bear Creek High School in Lakewood, Colorado. So far in four matches and 14 sets this season, she has helped the team to a 4-0 record and notched 4.5 kills per set, 2.6 digs per set, 0.9 blocks per set and 0.9 aces per set according to her MaxPreps profile.

Colorado Preps listed her as one of the top 10 hitters in Class 5A for the state. Her player profile via SportsRecruits with highlight video of her play can be seen here.

The Rams ended the 2017 season at 29-4 overall and 17-1 as Mountain West Conference (MWC) champions en route to a second round NCAA Tournament appearance.

Colorado State is currently 4-2 this season and on the cusp of the top 25 in the latest VolleyMob rankings. They have four outside hitters and one opposite on their 2018 roster – none of which are set to graduate following the season.

I’m so excited to announce I will be continuing my volleyball and academic career at Colorado State University! I would like to thank my coaches, family , and friends for pushing me to be the best student athlete I can be! Go RAMS🐏💛💚 pic.twitter.com/5lAnvW0hoX