Creighton Gets Commitment from Kari Zumach for 2018 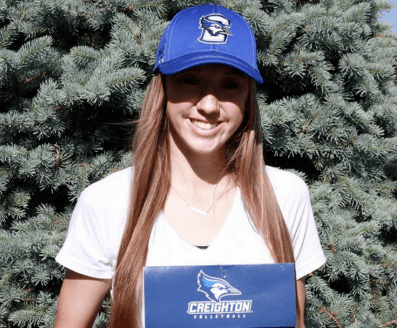 The Creighton Women’s Volleyball team has added a verbal commit for the 2018 recruiting class in Kari Zumach. A 6’2″ outside hitter, Zumach is from Buffalo, Minnesota.

Zumach is a two-time Mississippi 8 all-conference selection. As a junior she recorded 420 kills, 285 digs and 50 blocks and also played for Minnesota Select team on the club side. Her performance earned her other offers, as she was originally committed to Colorado State, but has since decommitted and now is scheduled to attend Creighton in the fall of 2018.

Creighton wasn’t the only option for Zumach, who also could have been linked to Kansas State. Kari’s sister, Kylee Zumach, plays for Kansas State and will be a redshirt junior in 2017. After earning AVCA All-America Honorable Mention honors as a true freshman in 2014, Kylee suffered an ACL injury in 2015, causing her to redshirt the season. That enabled the possibility that the two could play together, as Kylee would be a fifth-year senior in 2018 while Kari would be a freshman. However, Kari is opting to make her own collegiate path.

Creighton finished 2016 with a 29-7 record and went to the Elite Eight for the first time in program history. They will have three seniors on their 2017 roster, meaning they will have plenty returning in 2018 when Zumach joins the team.