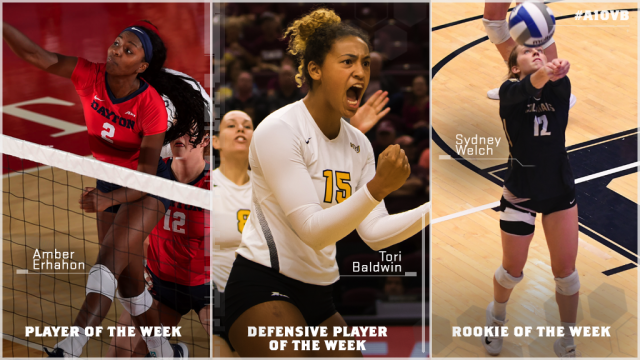 The latest Atlantic 10 weekly conference awards are out for performances in week 10 of the season, as Dayton senior Amber Erhahon garners the Player of the Week honor. Joining her on the award list is VCU junior Tori Baldwin and George Washington freshman Sydney Welch.

The A-10 Player of the Week, Erhahon, posted 3.75 kills per set on an incredible .578 hitting percentage. 14 of her kills came in a sweep of Davidson when she hit .812, amazingly the third time this year she has crossed the .800 barrier. She tacked on 16 more kills against VCU in a five-set match as she helped her team get so close to scoring a big win with the two top teams in the conference.

One of the reasons VCU won that game was because of VCU’s Tori Baldwin, who collects the Atlantic 10 Defensive Player of the Week honor. She did so by averaging 2.38 blocks per set in a pair of Rams wins. The first came over Saint Louis in sweep-fashion before Baldwin logged 10 blocks to help the team down Dayton in five sets.

Rounding out the trio of award winners is George Washington’s Sydney Welch, who takes home the A-10 Freshman of the Week. Just like Baldwin and VCU, Welch and GW earned a pair of wins for the week as the libero set a new school record for most digs in a four-set match with 34 against Duquesne. Combining the two matches, she averaged 6.25 digs per set.

As we begin November now and more opportunities for weekly awards, VCU and Dayton sit atop the Atlantic 10 with George Washington in the middle of the conference standings.