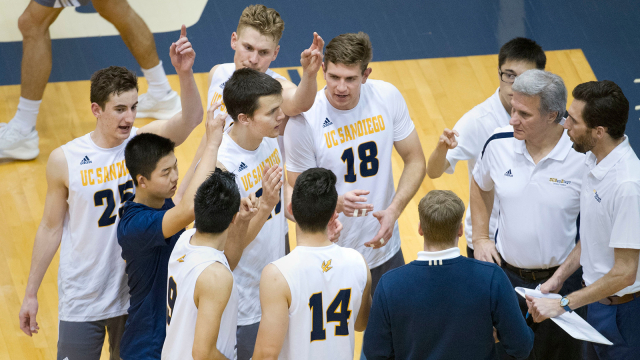 Class of 2018 recruit Logan Clark will join UC San Diego for the 2019 season as a freshman. Archive Photo via Andy Wilhelm

Standing at 6’6″, Clark is listed as a middle blocker and setter hybrid. At his high school, Logan has been the captain for three seasons. He also was with Coast Volleyball’s 16-2 Team that played in the 2016 Junior National Club Division and the 17-1 Team that did the same in the Open Division.

This season, Clark plays with the older age group at Coast Volleyball Club with the 18-1 Team that is ranked in the top five of the country and will once again appear in the Junior National Open Division in July. In terms of high school play, Clark’s season is slated to start in early March.

UC San Diego is receiving votes in the preseason 2018 Coaches Poll as they join the brand new Big West conference this season. They currently have six middle blockers and four setters on the roster, with two of the middles and a pair of the setters set to graduate before Clark arrives on campus.

Some of Clark’s latest highlights can be seen below via YouTube: