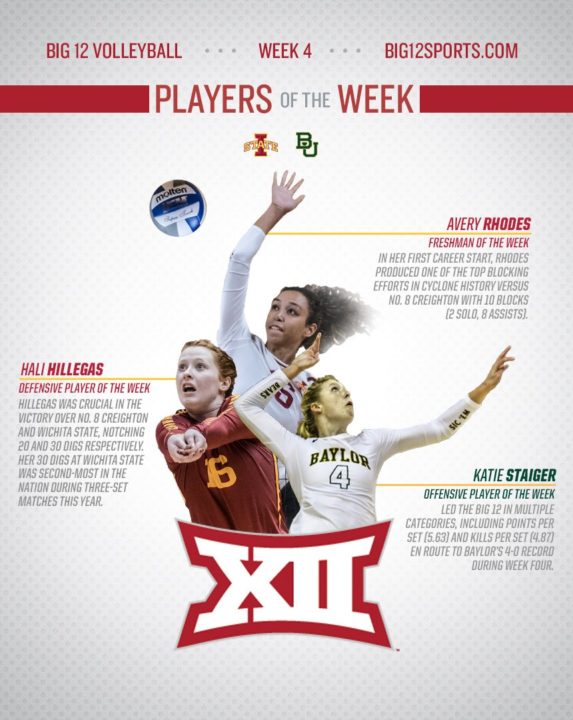 Following wins over a top-10 Creighton squad and on the road against (RV) Wichita State, Iowa State earned a pair of Big 12 Weekly Awards, joining Baylor to round out the trio of honorees.

Hali Hillegas embodied the Iowa State defense for the weekend and rode it to the latest Big 12 Defensive Player of the Week honor. Although Iowa State lost one match during the week, it came to an upstart Northern Iowa bunch when Hillegas posted 25 digs in five sets. The Cyclones would come back to take down then #7 Creighton with 20 digs and capped off a fantastic weekend with an astounding 30 digs in just three sets at Wichita State. The accolade is the second of the season for Hillegas and the fourth of her career.

Joining Hillegas as a fellow Cyclone to be honored is middle blocker Avery Rhodes, who took home the Big 12 Freshman of the Week. The loss to the Panthers as previously mentioned may have actually worked out for Iowa State, as it caused them to shuffle the lineup and find the strong play of Rhodes as she logged 10 kills and 15 blocks (1.88 per set) in two weekend matches.

Crashing the Iowa State award party was Baylor senior outside hitter Katie Staiger as she collected the Big 12 Offensive Player of the Week award. Staiger was the Big 12’s leader in kills and points per set for the week which not only earned her this honor but also put her on top of the all-time school mark for career kills in the rally scoring era. Overall, Baylor went 4-0 and won the Jason’s Deli Baylor Classic as Staiger was the MVP.

The honors give Iowa State their third and fourth weekly awards of the Big 12 season while Baylor earns their second. The honorees also snap the streaks of Kansas winning Big 12 Offensive Player of the Week and Lexi Sun of Texas earning the conference’s freshman of the week award.