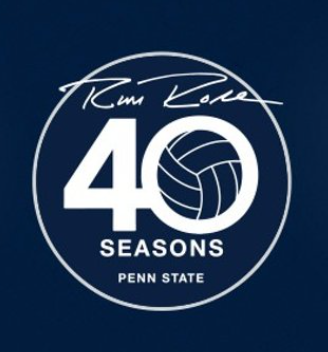 Legendary head Penn State volleyball coach Russ Rose was honored by many in Happy Valley and beyond. Enjoy this social media compilation from the weekend's festivities. Current Photo via Penn State Athletics

Legendary head Penn State volleyball coach Russ Rose was honored by many in Happy Valley and beyond.

40 years of @PennStateVBALL in one pic…thank you Russ (and Lori) …this is your legacy! pic.twitter.com/pzfD2InCcr

The celebration continues for Coach Rose!

After 40 years (and counting) you deserve all the recognition! @PennStateVBALL pic.twitter.com/t4Fpe1tYCB

Hear the ROAR for a man who truly deserves it. Congrats on 40 great seasons and we hope for many, many more! #WeAre pic.twitter.com/tqA7DxOXQa

‘Gnome’ more excuses! We better see you at Rec Hall tonight as we take on Texas A&M and wrap up our celebration of Head Coach Russ Rose! Redeemable vouchers, while supplies last, will be given away starting at 6:30 pm before the 8 pm first serve. #RR40 #WeAre #WeGnomeYouWantOne pic.twitter.com/5FPcKM8Srg

Congrats to @PennStateVBALL's head coach, Russ Rose who is celebrating his 40th season of coaching.

A coach that will go down in the history books. pic.twitter.com/2lG7pZR0Sc

With our celebration of Head Coach Russ Rose’s 40th season this weekend, we have to post a #TBT to Coach’s first season in 1979!!#WeAre pic.twitter.com/40WhY6OSus

Hear the ROAR for a man who truly deserves it. Congrats on 40 great seasons and we hope for many, many more! #WeAre pic.twitter.com/tqA7DxOXQa

The Nittany Lions have swept every opponent they have faced thus far in the 2018 season. Every match has been played in Happy Valley.

Penn State’s first real challenges of the season are coming up this weekend in Stanford, Calif. The Nittany Lions are scheduled to meet 2nd-ranked Stanford on Friday, Sept. 7 at 11 p.m. ET and 18th-ranked Oregon on Saturday, Sept. 8 at 5 p.m. ET as part of the Big Ten/Pac-12 Challenge.

Last season, Penn State compiled a 33-2 record and went 18-1 in the Big Ten Conference. The Nittany Lions’ season came to a close in the national semifinal at the hands of league foe and eventual national champion Nebraska.