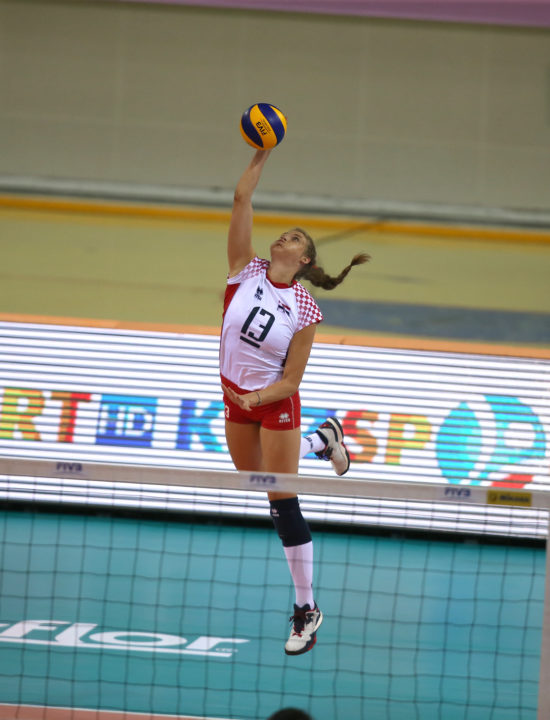 Samanta Fabris led Croatia to a 3-1 victory over Greece for their first Mediterranean Women's Volleyball Gold since 1993. Archive Photo via FIVB

The Mediterranean Games, a collection of nations to compete in a myriad of sports including volleyball, is starting in 2018 as opposed to its normal four-year cycle of 2009, 2013, 2017 after the host needed to push it back a tad. For women’s volleyball, pool play has now come to a close as we head to the placement matches to determine the final order.

In total, there were four different pools, each consisting of a trio of teams. Following a quick round-robin, the lowest ranked team in each pool was eliminated with the top two moving on to the quarterfinals. After that, we moved on to the semifinals for both the winners bracket and the 5th-8th place classification with the placement matches yesterday and the championship matches wrapping up today.

With a first-place finish on the line, Croatia took down Greece in four sets to win their second ever Gold medal at the Mediterranean Games for Women’s Volleyball.

Greece would go on to log more aces (9-7), but in terms of effectiveness of the serve it was pretty even. From there, Croatia had the stronger attack with 10 more kills (46-36) and dominated the block (14-5) while being more efficient with two less team errors.

Croatian captain Samanta Fabris (21 points) carried the way for her side and after her team dropped the third set, she stepped up to a remarkable 10 points to close things out. Coming into that game, she had the same amount of points as Sanja Gamma, who finished with 14. Martina Samadan tacked on 13 more for Croatia.

Although it was a losing effort, overall the tournament was a positive for the Greek side. They did show some spread-out play among the top in the loss with Anthi Vasilantonaki (13 points), Athanasia Totsidou (12 points) and Georgia Lamprousi (11 points) all in double figures for scoring.

The end result is the first Gold in this event since 1993 for the Croatians, while Greece earns Silver for the second time in the last four events with 2005 being the last. In total, it also gives Croatia four medals all-time with this being the third for Greece.