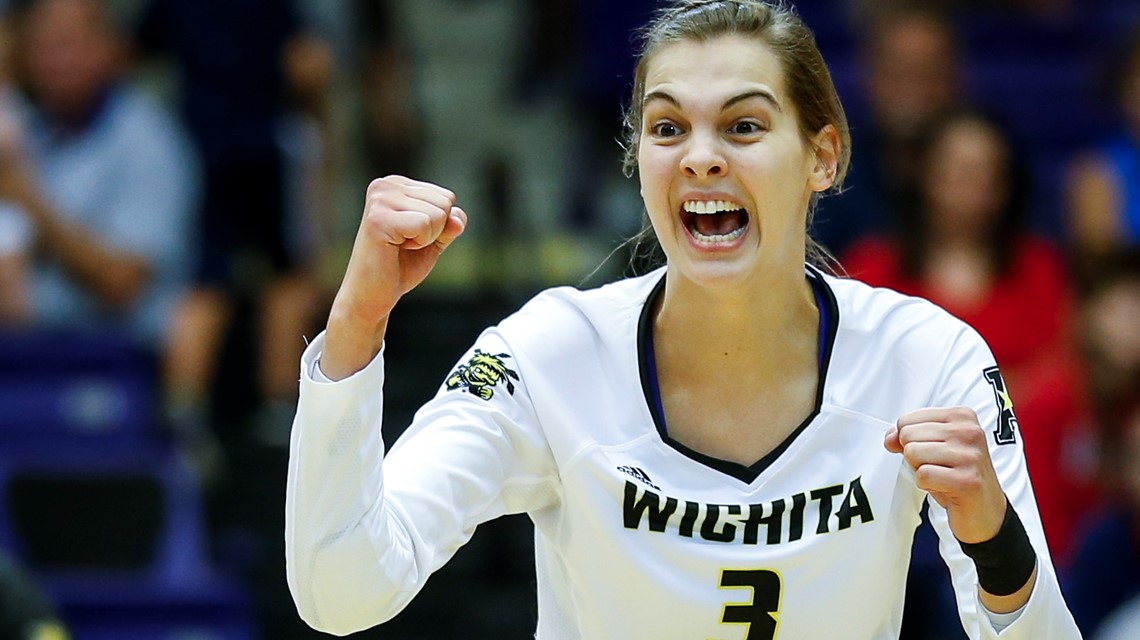 Philadelphia, Pennsylvania – In Wichita State’s first ever match as a member of the American Athletic Conference, the Shockers earned a four-set win on the road against Temple.

Mikaela Raudsepp dominated the match with 23 kills while hitting .408 to go with eight digs and had plenty of help as Wichita State out-hit Temple .327 to .253 and notched six more blocks (11-5).

The first set was tight and tied at 27 but the Shockers scored the last two including a kill from Abbie Lehman who would total 14 while hitting .414. Temple proved to be stronger in set two behind the play of Izzy Rapacz (21 kills, .385 for the match) and Kyra Coundourides (59 assists for the match).

Again Wichita State escaped in extra points in the third as they scored the final three points of the set and overcame two Owls’ set points. That crazy ending to the set may have broken the camels back so to speak as the Shockers ran away with the fourth 25-15.

In addition to the strong offensive performances of Raudsepp and Lehman, Giorgia Civita netted 25 digs and Emily Hiebert dished out 51 assists for the Shockers.

The opening weekend for Wichita State in AAC conference play is now in full force as they’re experiencing the far geographical stretches that it will cause them. They’ll stay on the east coast to minimize some travel as they face Connecticut in two days. Temple on the other hand stays at home as they will face Memphis in another AAC match on Sunday.

SET 1:
• WSU won a back and forth first set 29-27
• Three-straight kills from Raudsepp put the Shockers up 6-4
• The Owls tied it at seven on a Shocker ball handling error
• A block from Smith and Lehman gave WSU a 14-11 lead, but the Owls used a service ace to tie it at 15
• The Shockers reached set point at 24-23 on a kill from Alex Koon, but the Owls forced extra points with a kill
• WSU used a Lehman kill and an Owl hitting error to win 29-27
• Raudsepp had nine kills in the set, while Hiebert had 19 assists and Civita had six digs

SET 3:
• Temple rallied from an eight-point deficit to force extra points, but WSU won the set 29-27
• The Shockers jumped out to a 6-2 lead after a kill from Civita
• A block from Lehman and Hiebert increased the lead to 11-3
• The Owls used a 5-1 run to cut the lead to 12-8 and force a WSU timeout
• TU came all the way back to tie it at 17
• Three-straight kills gave the Owls a 20-19 lead
• The Shockers reached set point at 24-23 on a Raudsepp kill, but Temple fought off four set points before WSU used two kills from Lehman and one from Brown for the 29-27 win

Print Friendly Version
Follow the Shockers
Download the official mobile app of Wichita State Athletics – Go Shockers. Now, you can stay in touch with the Shockers anytime, anywhere, on your Android or iOS mobile device.Sign up now for the new and improved Shocker Mail. Get weekly updates on promotions, tickets, events and everything else Wichita State Athletics delivered straight to your inbox.