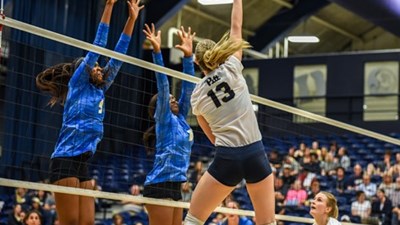 Pittsburgh's All-ACC outside hitter Stephanie Williams made a limited return to action for the Panthers this week. Archive Photo via Pitt Athletics

At the end of last week, two-time All-ACC and AVCA All-America Honorable Mention outside hitter Stephanie Williams did not appear in the team’s match against Pepperdine. This week, she did make her return but was limited in action and missed another match.

Williams played in the first two matches of the season, but rolled her ankle in the opener before playing through the second match. She was unable to get going for the third match.

This past weekend, she appeared in just one set for Pittsburgh against Oklahoma in which she logged two kills on seven tries with one error (.143). The team lost that set 25-16 though, as Pitt opted to keep the non-100% Williams on the bench the rest of the way in a four-set victory. She then missed the team’s next match in what was a road sweep of Seton Hall.

Williams’ weekend rounded out with the team’s sweep of defending Atlantic 10 champion VCU. She appeared in all three sets and notched seven kills on a .190 hitting percentage, four digs, two blocks, two assists and an ace.

Filling in for Williams last week against Pepperdine was 6’2″ freshman Sabrina Starks, who logged four kills (.500) and six blocks. That earned her more playing time against Oklahoma and Seton Hall, in which she totaled seven kills (.150) and eight blocks in five sets. She did not play against VCU in Williams’ return.

Also getting match action was pin Zoi Faki, who had come into the weekend with just two sets of play in 2018. She went on to play three sets against Oklahoma and a set against Seton Hall and VCU. Altogether, she notched four kills (.050) and an assist.

Pittsburgh is ranked 13th in the latest VolleyMob Top 25 as they head into week three unbeaten at 6-0. They will face Kennesaw State, Dayton and #12 Washington ahead.