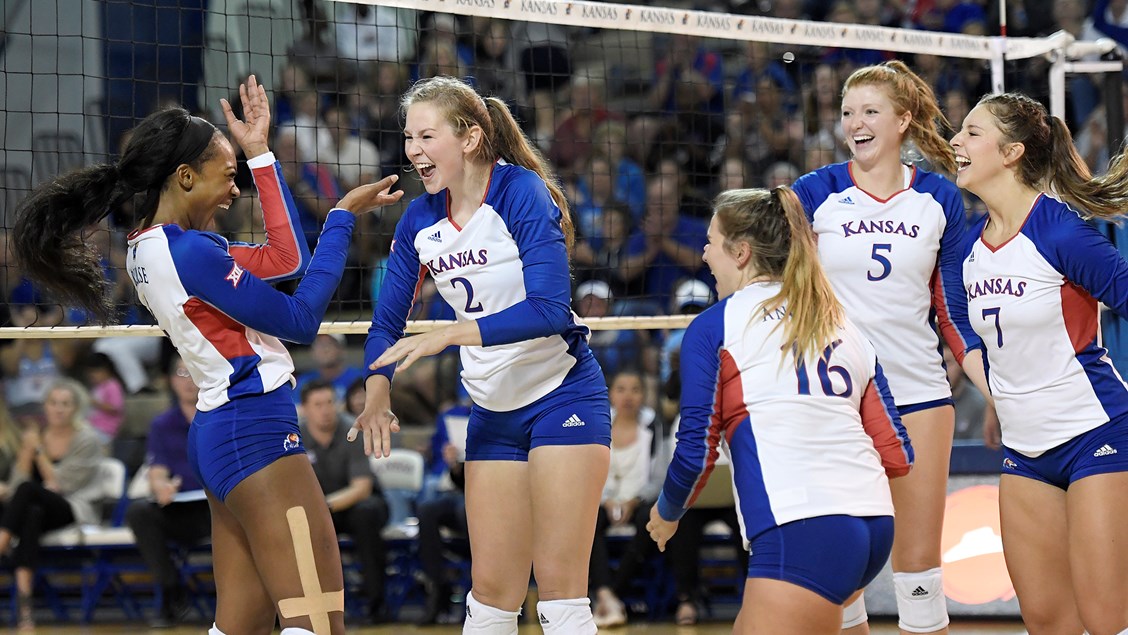 Kansas scored a huge victory to potentially change the trajectory of the Big 12 this season. Archive Photo via Kansas Athletics

Week eight was quite a doozy, with some conference carnage occurring and some takeaways at the top of some leagues.

If you polled a vast majority of people, I think most are still expecting Texas to wind up winning the Big 12. Still, that seemed like a foregone conclusion a week or two ago. Now it’s not so much.

That’s because Kansas is incredibly hot right now with nine straight victories. They’ve turned things around from a 4-4 start with the progression of some players and a dynamic block to pair with it. They’re undefeated in Big 12 play, while Texas is now a game back.

Sure, the Longhorns likely will take down the Jayhawks in Austin, but with how shaky Texas has looked (half of their Big 12 wins have come in five) there’s a good chance they lose one or two more matches. There’s a very real scenario that Kansas can win the Big 12, at least share it, and find a way to hosting in the NCAA Tournament. That seemed like a far cry at the start of the season, but give credit to Ray Bechard and the Kansas coaches for turning things around.

The Nittany Lions and Fighting Illini were sitting on two losses and the outside of the Big Ten title race, but each got big wins to at least stay within striking distance.

Penn State won at Purdue then beat Nebraska at home. Not just keeping themselves at two losses, but also dishing the Huskers their second in the process.

Illinois did lose its third, but then won at Wisconsin. They’re only chance would likely be to win out and hope Minnesota trips up several times, but at the very least they stay in that conversation in the top group, both in league and nationally.

For Penn State specifically, they still play the Golden Gophers in Pennsylvania toward the end of the season. So if they can keep pace and earn the victory there, they could wind up with at least a share of the title and a potential top four seed in the NCAA Tournament, which would be quite the season for such a young team.

Is UCF a legit threat to host in the NCAA Tournament?

Just looking at things from a standpoint of who have you beaten, my answer would probably be it’d be very tight only if they can win out. But based on what we know about the selection process, the answer is absolutely yes.

The Golden Knights have had a phenomenal season. They even started 3-3, yet are now 16-3 overall on a 13 match winning streak. Plus they have an early upset of USC this season.

The AAC doesn’t have anyone ranked at the moment, and Wichita State has been down a bit this season, but there are still some solid teams in the league. Maybe the biggest match for the conference and UCF comes this Sunday at Cincinnati in a battle of teams ‘on the cusp’ in the VolleyMob Top 25 Power Rankings.

As it stands right now though, UCF’s most important ranking for their NCAA Tournament selection – whether you agree or not – is the RPI. That’s where they came in at #14 in last week’s RPI and are in good standing in the latest RPI as well.

With the NCAA Tournament committees heavy reliance on the tool, UCF does indeed have a legit shot of hosting, especially with that USC win as a feather in their cap. Wichita State lost three matches last season prior to selection and were awarded the #16 seed, so we could definitely see a similar case for Central Florida if they win out. If they lose once, say at Cincinnati this week, I still think they’ll be clearly in that discussion.