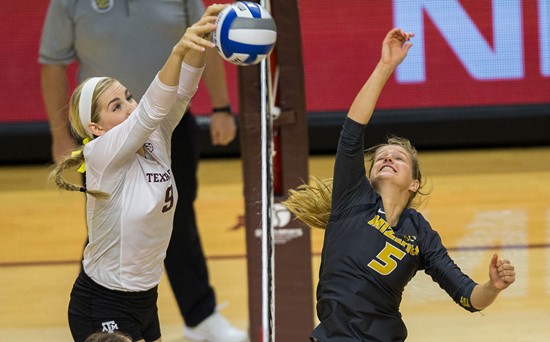 In a week that featured two shared awards for a total of seven given out on the week by the SEC, Texas A&M’s Hollan Hans and Camille Conner gave the Aggies three accolades. Among other award winners for the week were Nayo Warnell (Ole Miss), Alyssa Munlyn (Missouri), Madison Lilley (Kentucky) and Paige Hammons (Florida).

Sophomore outside hitter Hollan Hans collected the week six SEC Player and Offensive Player of the Week awards for her lone match of action. In a sweep of Georgia, Hans posted 15 points as she tacked on 12 kills while hitting .435.

Her teammate, Camille Conner, earned co-SEC Setter of the Week in going for 35 assists in that lone match to go with a trio of kills. Behind her setting, Texas A&M hit .379 as a team in the sweep against Georgia as she was a big factor in Hans strong week.

As previously mentioned, Conner wasn’t the only setter awarded, as Kentucky’s Madison Lilley shared the award with 35 assists in her lone match – a sweep of Mississippi State. It wasn’t the only shared honor, as Warnell and Munlyn split the SEC Defensive Player of the Week award as well.

Rounding out the weekly recognized players was Paige Hammons of Florida, who collected SEC Freshman of the Week. Hammons averaged 2.33 kills and 2.50 digs per set as the Gators won both of their matches.