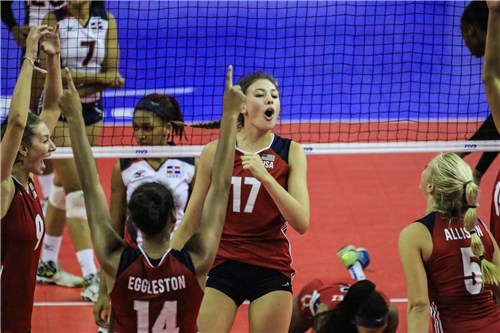 The U.S. Women's Junior National Team became the second team to qualify for the 2019 FIVB Women's U20 World Championship. Archive Photo via NORCECA

This past weekend, the United States Junior Women’s National Team swept the Dominican Republic to win the NORCECA Women’s U20 Continental Championship. The 5-0 record led to the seventh championship in the event for Team USA, as the tournament title locks their spot in the 2019 FIVB Women’s U20 World Championship.

The Americans aren’t the lone team to qualify thus far, joining the 2018 Asian champions in Japan, who downed China in the championship match on June 17.

Based on who has qualified and what still needs to be played, that leaves the South American Championship in October, African Championship, Pan-American Cup and the European Qualifiers that kick off in September.

Following qualification, assuming the format remains the same, the 16 teams are split into four pools of a quartet of nations. Results from the opening round of pools then mix and match a new set of groups that lead into the placement matches – essentially four sets of semifinals to sort out teams ranked #1-16.

The defending champions from 2017 are China, who was followed by Russia and Japan. The United States ended up in seventh place.