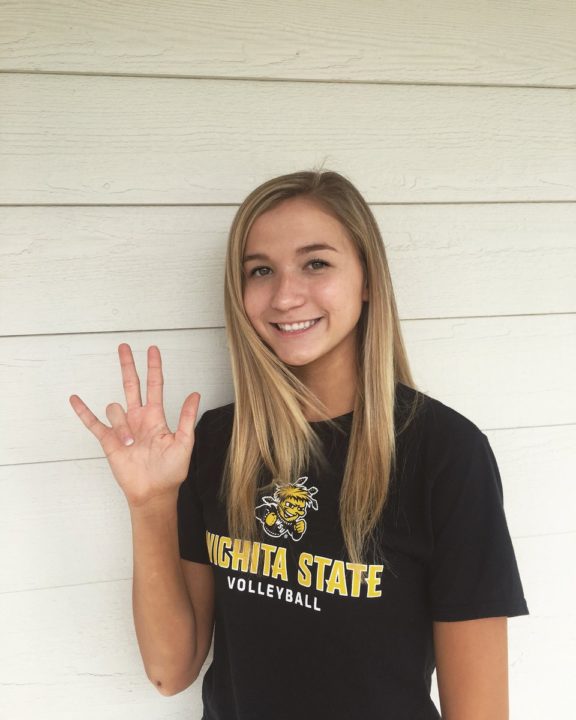 Class of 2019 recruit Skylar Goering has committed to the Wichita State University women’s volleyball program for indoor play. A 5’11” outside hitter, Goering will join the Shockers for her first season in the fall of 2019.

A junior at nearby Maize South High School in Wichita, Goering has played on the pin and at the middle blocker position. Her latest stats available on her MaxPreps profile are from her sophomore season, but she still totaled strong numbers with 252 kills (2.9 per set), 113 digs (1.3 per set), 49 aces (0.6 per set) and 17 blocks (0.2 per set).

Goering also plays with Shockwave 17-1 as part of the Shockwave Volleyball Academy. Her Hudl page also lists her as being able to play outside hitter and opposite. Video of her play can be seen below via YouTube:

Goering becomes the first class of 2019 recruit committed to Wichita State recorded in the VolleyMob Recruiting Database, although they have a pledge from a 2020 commit as well.

Wichita State is coming off of a 29-4 season in which they won the American Athletic Conference (AAC) at 20-0 in their inaugural season in the league. They also made the NCAA Tournament’s second round and got to host as the #16 seed in the event.

I am extremely excited to announce that I will be continuing my academic and volleyball career at Wichita State University??? #watchus pic.twitter.com/T9u7xqi5ik