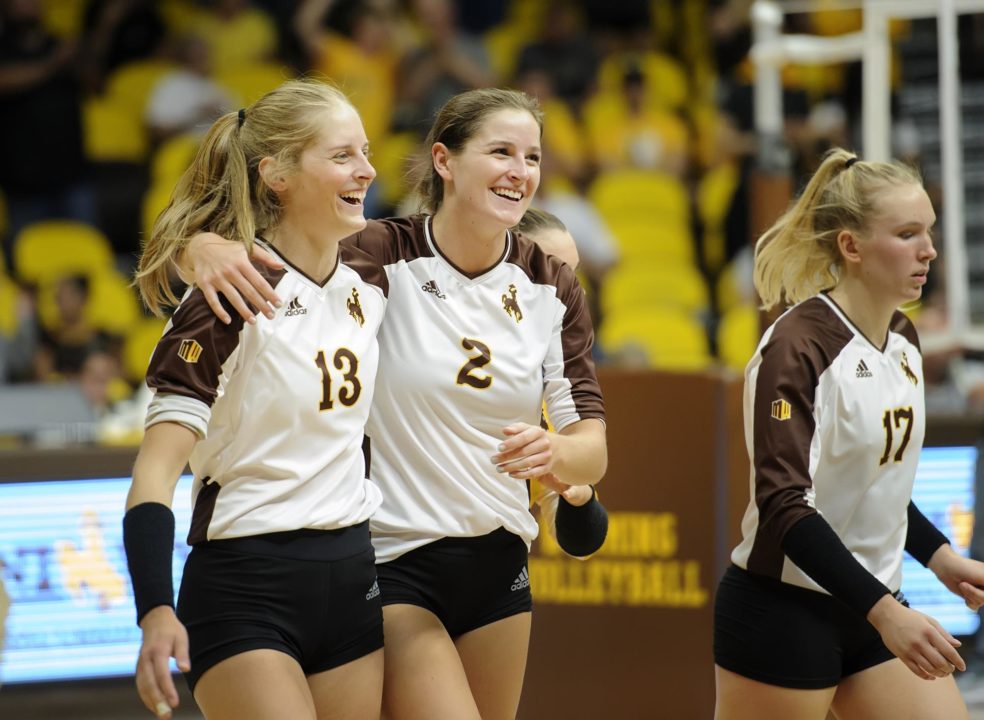 Wyoming was able to pull off a top-15 upset as they took down Colorado at home 3-2. Archive Photo via Ted Brummond/Wyoming Photo Services

RUMBLE IN THE ROCKIES

Upsets were bound to happen on the opening week of the 2018 college volleyball season, and that’s exactly what happened as Wyoming made Colorado one of the first week’s victims in a five-set thriller.

Beyond earning their first ranked victory since downed #14 Ohio State in 2015 and the seventh win over a top-15 team all-time, the Cowgirls victory makes them the winner of their own hosted tournament, the Rumble in the Rockies.

Of course, part of what happened could be attributed to Colorado star middle blocker, Naghede Abu, not playing in the match for the Buffaloes. Standing at 6’4″, Abu led CU with 153 blocks last season – 27th in the country – and was sixth in the Pac-12 at 1.20 blocks per set. She could have helped Colorado in what was a high-flying, efficient, offensive battle.

Give plenty of credit to the Cowgirls though, who jolted out to a 2-0 lead behind a balanced attack led by setters Cori Aafedt (26 assists, 9 digs) and Marissa Harmon (24 assists, 4 digs). They facilitated to a trio of Wyoming players who reached double-digit kills in Emily Lewis (15 kills, .387, 3 blocks), KC McMahon (15 kills, .458) and Jackie McBride (14 kills, .417, 5 blocks) with all three hitting at blistering clips.

Colorado stormed back to send things to a fifth, even winning the fourth in dominant fashion. They had plenty of youngsters in the lineup, but still fought hard as Justine Spann (16 kills, .278, 5 digs), Alexa Smith (15 kills, .211, 8 digs) and Anyse Smith (10 kills, .562, 4 blocks) carried the load offensively. Lillie Klemmer (7 kills) also hit .455 while Rachel Whipple (19 digs) was the leader for the match in digs and Brynna DeLuzio (31 assists, 7 digs) in assists.

Wyoming then stood strong in the final game as it was more of the same for Lewis, McMahon and McBride in taking advantage of a young group of Colorado players defensively. Reed Copeland also tacked on 8 kills and 6 blocks for the match and was key in pulling things out.

Moving forward, Colorado’s schedule doesn’t get any easier next week in the Big Ten/Pac-12 challenge against Illinois and Iowa. Wyoming on the other hand heads to Oregon for the Portland Tournament where they will see LIU Brooklyn, Portland and Montana State.