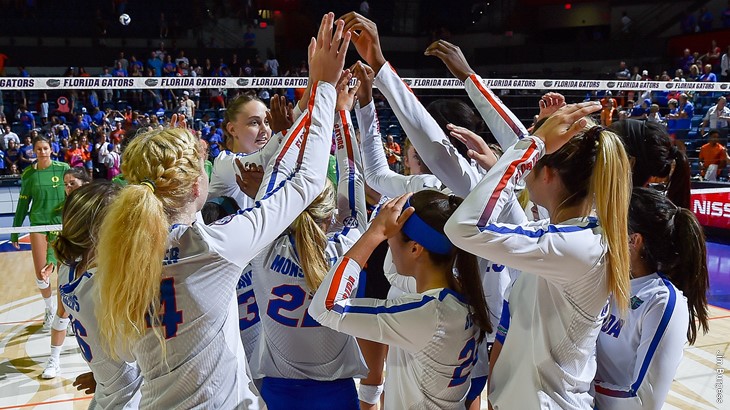 #1 Florida hosts #22 Florida State in a rematch of a Seminoles' upset at the 2016 NCAA Tournament second round. Archive Photo via Florida Athletics

Although there were two matches yesterday, for the most part today signals the beginning of week five of the season. Three ranked and another team on the cusp continue their season on the day as most teams either begin conference play or have one more non-conference match to go. The ladder rings true for our match of the day as two rivals square off in the Sunshine state.

Last year in the NCAA Tournament, Florida State upset a nationally seeded Florida Gators team in the second round in a five-set thriller. Just like that one, this ranked meeting takes place in Gainesville, the home of the Gators.

Florida looks even better than last year’s strong team as they sit at number one in the VolleyMob Top 25 for the third consecutive week. They’ll look for their fourth ranked win of the season in this one, as senior outside hitter Carli Snyder will look to duplicate her performance from these two sides last match as she notched 18 kills and 17 digs while hitting .317.

Florida State lost plenty of pillars from last year’s team, but back is Milica Kubura, a 6’4″ outside hitter who logged 14 kills on a .414 hitting percentage in that 2016 NCAA Tournament match. So far the Seminoles are undefeated on the road, with their only loss coming to #21 Colorado State in Tallahassee as they’ve been able to beat some strong opposition in Baylor, TCU and Auburn. None of those compare to Florida though, which would be a true marquee victory.

Oregon continues to stay steady and proved themselves in the non-conference with wins over Nebraska, Wichita State and Cal Poly, but now they take on a new test in pushing Stanford and Washington at the top of the Pac-12. Oregon State looks ready to make some noise too after a 10-2 start showing they may be ahead of schedule after bringing in a stellar recruiting class.