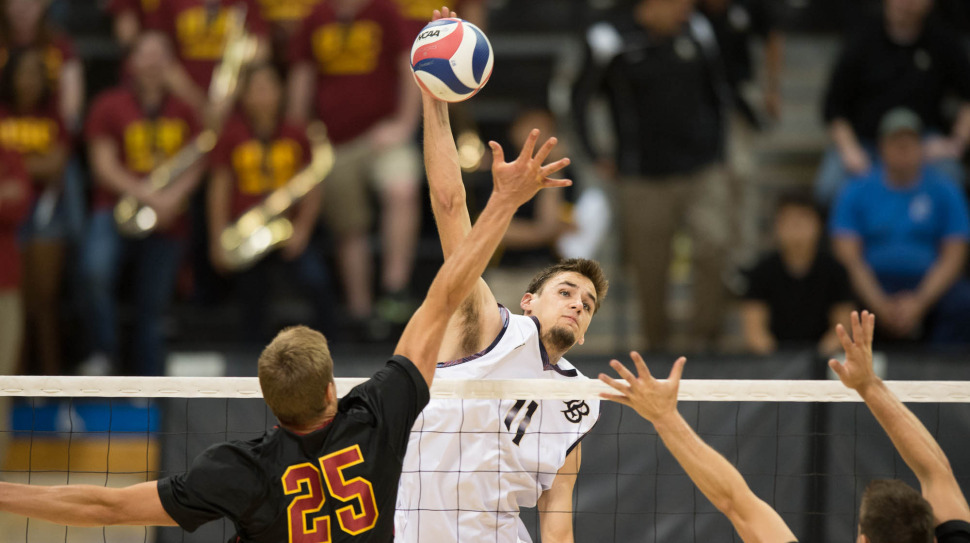 Los Angeles, California – In a rematch of a battle between number one and number two that occurred on Saturday, the top-ranked Long Beach State 49ers once again defeated the second-ranked UCLA Bruins in four sets. This time things were in Pauley Pavillion, but it made no difference as the Beach were dominant on offense.

In total, that offense hit .408 for the match, led by reigning National Player of the Year TJ DeFalco (23 kills, .500, six digs, three assists, two blocks) and Kyle Ensing (19 kills, .400, seven digs). As a duo, they combined for 42 of the team’s 67 kills – and did so more than efficiently. Give credit to setter Josh Tuaniga too, who kept feeding the pair and wound up with 57 assists and 13 digs.

The first meeting between the teams saw the Beach post strong offensive numbers as well, but they weren’t as strong. The Issue for UCLA though was that they posted 25 serve errors to four aces, so although their aggressiveness made things more difficult, it became problematic. In this one, the ace numbers weren’t there for either team (three each) while UCLA’s errors were down (13), but they didn’t make things difficult enough on the 49ers’ offense. It also didn’t help that the Bruins kills leader, Christian Hessenauer, was out for the match.

For LBSU, they had lost just one set prior to Saturday’s match with UCLA. They won, but dropped a game for just the second time. That set loss came in the first before the 49ers reeled off the final three sets.

Their set streak against UCLA continued in game number two as LBSU survived eight ties and two lead changes to pull ahead for a 25-21 set victory. It was quickly snapped in the second though as UCLA overcame a late LBSU push to take it 25-23 and even the match at 1-1.

In a critical third, UCLA jumped ahead 7-3 after Bruins’ setter Micah Ma’a (48 assists, 11 digs, two aces) notched his second ace of the set on a 70 MPH rip. The set’s theme wouldn’t be the UCLA serve though, as it was instead about a few runs for the Beach. The first was a 6-0 run filled with Ensing and DeFalco kills to lead 9-7. The second happened after a Dylan Missry (11 kills, .258) kill made it 17-15 UCLA, as LBSU logged five straight with two from Bjarne Huus (nine kills, .273, 11 digs). That was momentarily interrupted by a Daenan Gyimah (four kills, .364, three blocks) kill, but continued with a 5-1 finish to wrap up a 10-1 spurt.

In a contested fourth that was tied 19-19, Ensing and DeFalco would combine for the next three points on kills before Nick Amado (five kills, .333, three blocks) logged an ace. That run gave them the distance they needed as they finished things up at 25-21 and 3-1 overall.

Moving ahead, Long Beach State now gets a well-deserved rest as they won’t resume action until March 2 at #12 CSUN. For UCLA, they don’t have quite the same luxury and will head to the road to take on #11 Pepperdine on Friday night.

LOS ANGELES — The top-ranked Long Beach State men’s volleyball team turned in another excellent performance on Wednesday night as the Beach defeated No. 2 UCLA, 3-1 [25-21, 23-25, 25-19, 25-21], inside Pauley Pavilion to remain undefeated and extend their winning streak to 14 matches.

Long Beach State improved to 14-0 on the year, while UCLA dropped to 14-3. The Beach handed the Bruins their first home loss of the season as UCLA was 9-0 inside Pauley entering the match against LBSU.

The Beach hit .408 in the contest as junior setter Josh Tuaniga paced the offense dishing out a season-high 57 assists to go along with a career-best 13 digs for his fifth-career double-double. With Tuaniga setting the tone for the Beach, juniors TJ DeFalco and Kyle Ensing each tallied season-highs in kills to lead the offense.

While the Beach were solid offensively, they also turned in several efficient defensive performances as well. Tuaniga’s 13 digs led the team, while Huus added a season-best 11 digs and Ensing posted seven. DeFalco and libero Jordan Molina each had six digs in the match.

At the net, Anderson posted four blocks, while Huus added three. Redshirt junior Nick Amado also recorded a total of three blocks with one solo stop and a pair of block assists.

The Beach started off hot, hitting .516 (18-2-31) in the opening set. However, the Bruins played them pretty evenly posting a .344 attack percentage (16-5-32). The two teams battled each other through eight ties and a pair of lead changes before Long Beach State commanded a 13-12 lead on a Huus kill. Huus’ spike began a 4-0 run by the Beach which the Bruins were unable to recover from. Long Beach State would go on to win the first set, 25-21.

The Bruins evened the set score in the second as they earned a 25-23 win over Long Beach State. UCLA used a .412 attack percentage — its highest of an set — to hold off the Beach.

With the match tied 1-1 coming back from the intermission, Long Beach State knocked down 19 kills in the third set to UCLA’s nine as the Beach jumped out in front to a 2-1 set lead after winning the third by a score of 25-19.

The Beach took a 3-0 lead in the fourth set, but the Bruins countered and evened the score 3-3 after back-to-back kills from Jake Arnitz. The two team fought each other point-for-point from there until they found themselves deadlocked at 19-all. Long Beach State broke the tie on a DeFalco kill which sparked a 4-0 Beach run giving LBSU a 23-19 advantage. With the set in their favor, the Beach closed it out on a kill by Huus to win 25-21 and complete with series sweep against UCLA.

The Bruins were led by JT Hatch and Grant Maleski who each had 13 kills. Hatch registered a double-double as he added 10 digs in the match. Setter Micah Ma’a also notched a double-double with 48 assists and 11 digs.

Long Beach State will kick off Big West Conference action as the Beach travel to No. 11 CSUN on Friday, March 2 at 7 p.m.

The No. 2-ranked UCLA men’s volleyball team registered the best opponent hitting percentage of the season, .331, against  top-ranked Long Beach State, but it was not enough to stop the 49ers in a non-league four-set decision played in Pauley Pavilion on Wednesday night. Scores of the match were 21-25, 25-23, 19-25, 21-25. UCLA, which was led by freshman Grant Maleski‘s 14 kills, is now 14-3 on the season and heads to play a Mountain Pacific Sports Federation match on Friday night at No. 10 Pepperdine. Long Beach State upped its record to 14-0 after hitting .408 for the match.

UCLA jumped out to a 5-3 edge early in set one. Long Beach came back to tie the score at points 5, 6, 7 and 8. Back-to-back kills by the 49ers put the visitors up 8-10. Kills by Dylan Missry and Maleski evened the score at 10. Long Beach quickly went back in front by two only to see UCLA tie it up on kills by Micah Ma’a and Daenan Gyimah. The 49ers separated with four straight points to pull out to a 12-16 advantage. UCLA closed to one at 16-17 on a JT Hatch kill and then at 18-19 after another Hatch kill. However, the Beach ripped off the next three points for an 18-22 margin and went on to take the first set 21-25. Long Beach hit .500 for the set.

Long Beach grabbed the early lead at 4-8 in set two. The Bruins battled back to get within one at 10-11 on a kill by Missry. Kills by Maleski and Martin tied the score at 13-all. A sharp-angle cross-court smash by Hatch put the Bruins in the lead at 14-13. After the score was tied at 14 and 15-all, UCLA scored three straight on a kill by Oliver Martin, an ace by Hatch and a Beach error to go up 18-15. Another Maleski kill made it 22-18. Long Beach narrowed the margin to 22-21 after a block. A Hatch kill moved UCLA to set point and the senior then delivered the winner for a 25-23 win. The Bruins hit .412 for the set, with Maleski totaling six kills.

The third set was a series of runs. After Long Beach took a 1-3 lead, UCLA answered with six straight points behind the serve of Ma’a for a 7-3 advantage. The Beach then ran off the next six points to regain the lead at 7-9. A Missry kill snapped the run and the Bruins tied the score on a Maleski kill off hands. The score was even at points 10 and 11. After Long Beach went in front 13-15, UCLA rebounded with four straight on a pair of Missry kills sandwiched around a couple of errors for a 17-15 lead. The next five kills went to Long Beach State and the 49ers moved ahead 17-20. UCLA stopped the run on a Gyimah kill, but Long Beach responded with a kill and their first ace for an 18-22 advantage. A service error and another ace made it 18-24 before Long Beach ended the set with a kill at the net for a 19-25 win.The visitors hit .395 for the set to .216 for the Bruins.

Long Beach opened up a 2-5 lead to start the fourth set. UCLA ran off the next three points and tied the score after a big swing from Jake Arnitz. The 49ers grabbed a series of two-point leads before the Bruins put three straight together to emerge with a 14-13 lead following a hitting error by the 49ers. UCLA moved in front 17-15 after a dig by Ian Parish set up a Hatch kill. Long Beach rallied to take an 18-19 edge but UCLA tied it on a spike from Hatch. Long Beach tallied the next four points to go up 19-23 on a couple of kills, an ace and a Bruin error. Maleski hit the line for a point to make it 20-23. Long Beach State closed out the match with a couple of kills for a 21-25 win.

Hatch finished with 13 kills (.379) and tied his season-best with 10 digs. Missry added 11 kills and Martin totaled eight kills (.583) and two blocks. Ma’a led UCLA with a season-best 11 digs to go along with 49 set assists. UCLA hit over .300 in three of the four sets and won the blocking battle 8.0 to 7.0 for the match, but Long Beach had 11 more kills on the same number of total attacks.