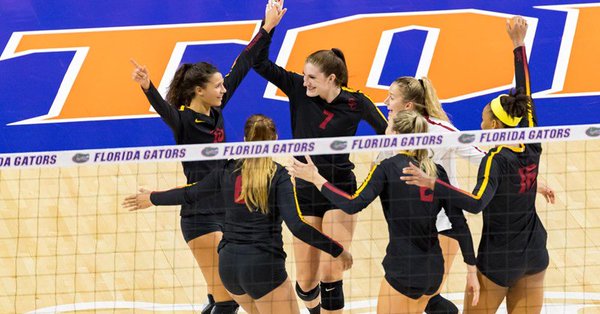 10th-ranked USC demonstrated its dominance with a pair of Friday sweeps against Louisiana and 24th-ranked San Diego in SDSU/USD Challenge action. Current Photo via USC Athletics

10th-ranked USC demonstrated its dominance with a pair of Friday sweeps against Louisiana and 24th-ranked San Diego in SDSU/USD Challenge action.

10th-ranked USC opened the SDSU/USD Challenge with a sweep of Louisiana Friday afternoon in San Diego, Calif. It was the first all-time meeting between the programs.

It was tight early before the Trojans used an 8-0 run to pull ahead 21-11 lead in the opening set. USC led the rest of the way and claimed a dominant 25-13 win.

In the second set, the Trojans put together a 6-1 stretch to post a 13-7 advantage over the Ragin’ Cajuns. They didn’t let up from there en route to a 25-16 victory.

The third set contained 12 ties before USC tallied 4 of the last 5 points to register the sweep with a 25-22 win.

Brooke Botkin (18 kills, 12 digs) and Raquel Lazaro (45 assists, 13 digs) each notched double-doubles for the Trojans, while Khalia Lanier tallied a team-best 19 kills and hit at a .410 clip. Victoria Garrick logged a team-high 17 digs in the victory.

The 10th-ranked Trojans notched their second win of the day in straight sets with a nightcap win over 24th-ranked San Diego in straight sets. USC outdid the Toreros in attack percentage (.257 to .129) and blocks (11 to 3).

In the opening set, the programs played through 9 ties before USC notched 4 of the final 7 points to record a 25-22 win.

San Diego used a 5-1 push to pull ahead in the second set and led  the rest of the way en route to a dominant 25-15 victory.