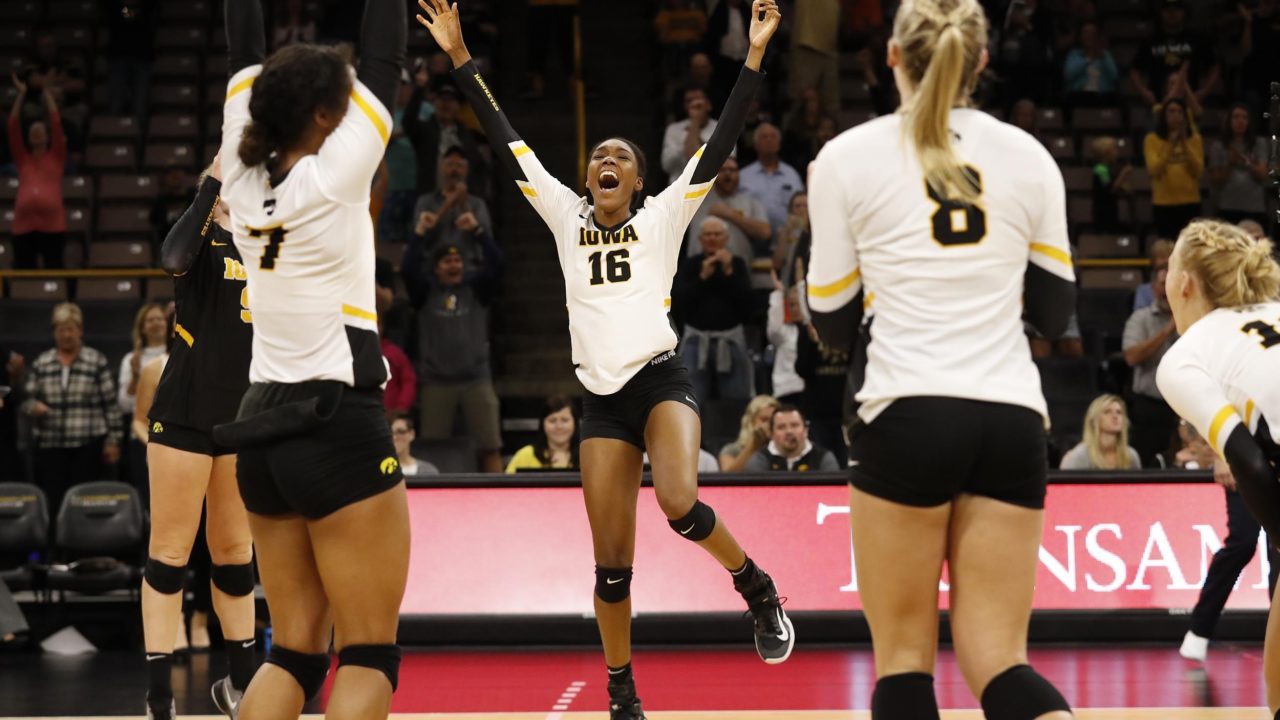 Syracuse outlasted Wyoming in 5, while Iowa registered its first road win at Iowa State since 1997. The Hawkeyes and Cyclones met as part of the Iowa Corn Cy-Hawk series. Current Photo via Iowa Athletics

Syracuse outlasted Wyoming in 5, while Iowa registered its first road win at Iowa State since 1997. The Hawkeyes and Cyclones met as part of the Iowa Corn Cy-Hawk series.

Syracuse overcame Wyoming, which received votes in VolleyMob’s latest power rankings release, in 5 sets at the Cyclone Classic Friday afternoon to notch its third victory of the season. The Cowgirls posted a better hitting percentage than the Orange (.192 to .185), but came up short of the win in the long run.

Syracuse holds on for a 3-2 win over Wyoming in the first all-time meeting between the two schools! pic.twitter.com/ykMuyI0td9

In the first set, the Orange jumped ahead 8-3 and withstood a comeback drive by the Cowgirls to earn the 25-18 win. Wyoming cut the deficit to one, but were unable to take a lead in the opener.

The teams battled through 7 ties before the Orange could edge the Cowgirls, 25-22, in the second set. Syracuse notched the final 5 points to secure the win.

It was back and forth in the third set, which contained 14 tie scores and 6 lead changes. With the score knotted, 29-29, Wyoming kept the match alive and claimed a 31-29 win with back-to-back kills.

The Cowgirls continued their comeback bid with a strong fourth set performance. They began with a 3-0 run and never trailed en route to their 25-18 win.

In the decisive fifth set, the teams played through 10 ties and 5 lead changes before the Orange came up with the 15-13 win with a 3-0 closing run.

Emily Lewis (21) and Reed Copeland (10) led the Cowgirls offensively, while Cori Aafedt registered a double-double with a team-high 33 assists and 15 digs. Madi Fields led the defensive effort with 20 digs.

In the annual Iowa Corn Cy-Hawk Series the Hawkeyes prevailed over the Cyclones, 3-1, in Ames, Iowa. It was a historic night, as it marked Iowa’s first win on the road against Iowa State since 1997.

It's a #Hawkeye state! Iowa beats Iowa State in four sets for its first win in Ames since 1997! #IowaCornCyHawkSeries #FightForIowa

The intrastate rivals fought through 7 ties and 6 lead changes in the opening set. The Hawkeyes earned the win with a 13-5 closing stretch, 25-20.

Iowa State extended the match, edging the Hawkeyes 25-23 in the third set.

The Hawkeyes went up 6-1 in the fourth set, however the Cyclones worked their way back into contention, tying the score midway, 12-12. Iowa responded with a 5-1 stretch to secure the win and the 4-set rivalry win, 25-20.