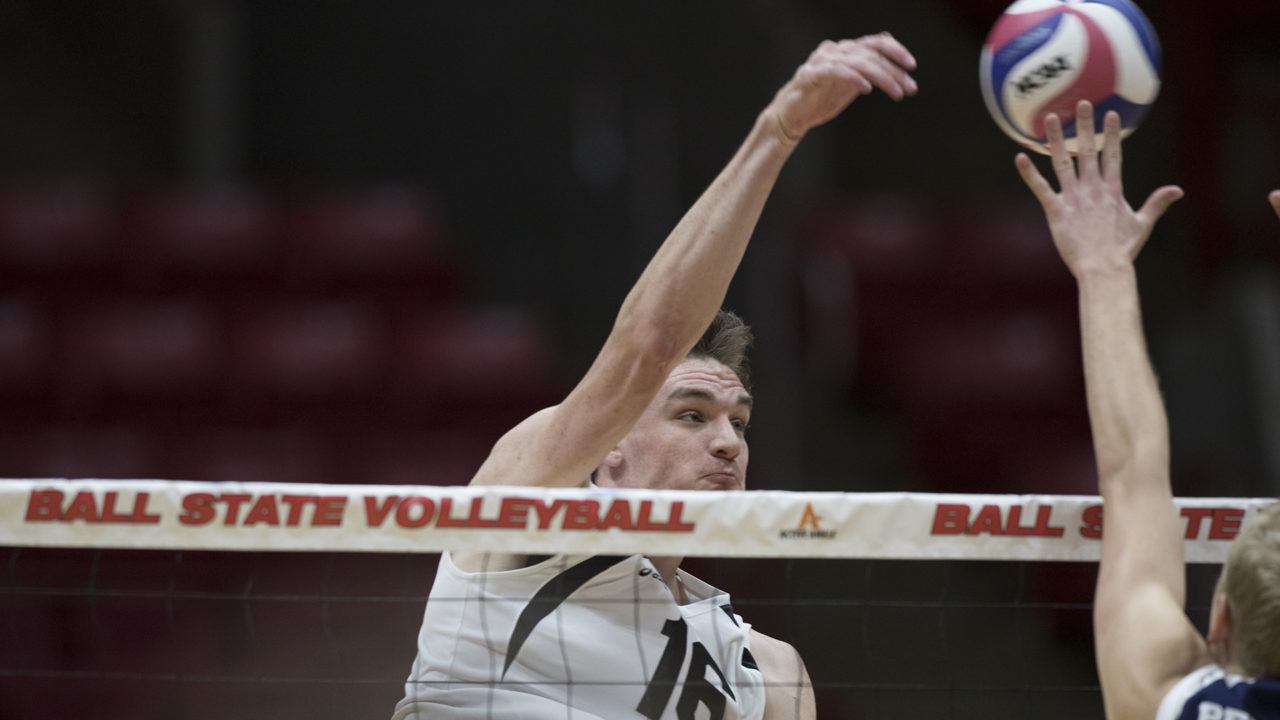 #11 Ball State rolled through Grand Canyon in a home match up 3-0, with freshman Matt Szews leading the pack with a double-double.

The third set was more competitive, as there were nine ties and four lead changes throughout the set. The Lopes led the Cardinals 12-11, but a slew of errors kept Grand Canyon from taking the set, with Ball State completing the sweep at 25-21.

Leading the way for the Cardinals was freshman Szews with a double-double of 12 kills and 11 digs while Surane added nine kills. Putting up a strong front at the net was Matt Walsh who blocked a match-best 12 balls and Mitch Weiler added six.

The No. 11 Ball State men’s volleyball team returned to Worthen Arena Wednesday night for round one against MIVA foe Grand Canyon. The Cardinals swept the Lopes, 25-21, 25-10, 25-21.

The Cardinals came out ready to play, scoring the first two points of the match. Ball State then went on a 4-0 run making the score 7-2, causing the Lopes to call an early timeout. In the opening set, Surane led the way with five kills for a .556 hitting percentage. Szews added four kills and four digs while Walsh knocked down four blocks. As a team, Ball State had 15 kills and seven blocks in the set one victory, 25-21.

Set two was all Ball State and too much for Grand Canyon to handle. The Cardinals won the set with a score of 25-10. Ball State had 10 kills while the Lopes were 3/24 in kills. Szews led the set with three kills and Surane, Weiler and Walsh each added two.

The third set was back and forth with nine tied scores and four lead changes, but the Cardinals were able to finish the match with a 25-21 set three victory. Ball State had 15 kills, 15 digs and three blocks in the final set. Szews had five kills, one being the match winner, and a set high seven digs. Gross, Weiler and Alex Piaeach knocked down three kills.

“Our guys really understood our game plan tonight,” said head coach Joel Walton in a post game interview. “Our defense was in the right place at the right time. We put a lot of pressure on them and did a great job tonight with our blocking.”

“Grand Canyon is going to come out again tomorrow night motivated and ready to play us again,” added Walton. “We have to come ready and try to not let them get on track.”

For the most up-to-date news on the Ball State men’s volleyball team, please follow @BallStateSports and@BallStateMVB.

Three days after nearly pulling an upset on the best team in the country, the GCU men’s volleyball team was unable to match the same intensity and lost a three-set match to No. 11 Ball State on Wednesday evening. The Lopes were defeated by scores of 25-21, 25-10, and 25-21 and their record falls to 9-8 for the season.

Grand Canyon had a tough time from the start of the match. The Lopes quickly fell behind 7-2 in the first set and never gained the lead. Offensively, GCU tallied eight kills in the set, a game high, and were led by three kills each from Matthew Kinnebrew and Shalev Saada.

The struggles continued in Set 2 as Ball State again got out to an early lead, up 9-3, and never looked back. Grand Canyon committed 14 attacking errors during the set and struggled to earn side outs.

The Lopes rallied back in the third set to take a 12-11 lead over Ball State. Attacking woes then struck GCU again as the Cardinals regained the lead and went on to win the set, and the match, by a score of 25-21.

GCU will play for a better result tomorrow night as the Lopes face Ball State again at 6 p.m. MST.