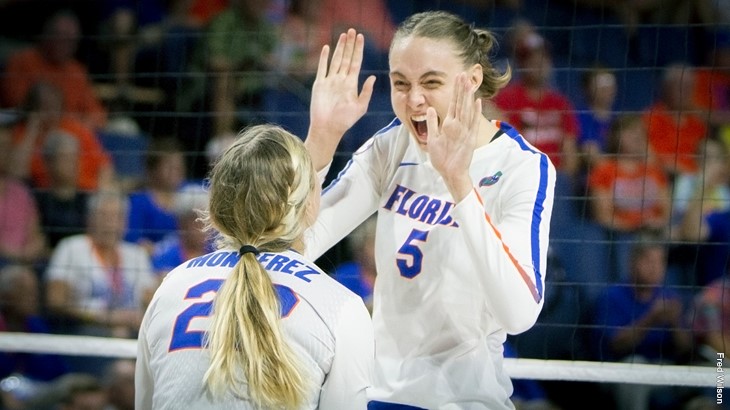 Rachael Kramer posted 9 kills and 7 blocks as the Florida middles were to key to defeating Florida State. Archive Photo via Florida Athletics

Playing on the road against an in-state rival who usually makes things tough on the Gators, Florida was able to take down Florida State in four. It was a dangerous place to be for the Gators, who just a week ago were upset by Northern Arizona, but avoided a similar fate to the Seminoles, who were previously unbeaten at home.

In other notable performances for Florida, Allie Monserez (19 assists, 11 digs) had the lone double-double of the match. Additionally, Thayer Hall (12 kills, .167, 3 blocks) struggled with errors but led the team in kills while Holly Carlton (9 kills, .200, 5 blocks), Paige Hammons (3 kills, 9 digs) and Allie Gregory (14 digs, 4 assists, 2 aces) were near the top of the totals for Florida.

Up next, Florida hosts the Gator Invitational with Jacksonville, Florida International and Army. Florida State meanwhile gets another SEC foe in Auburn before heading into ACC play.