#11 Loyola-Chicago Battles To Take Down #3 BYU In Four 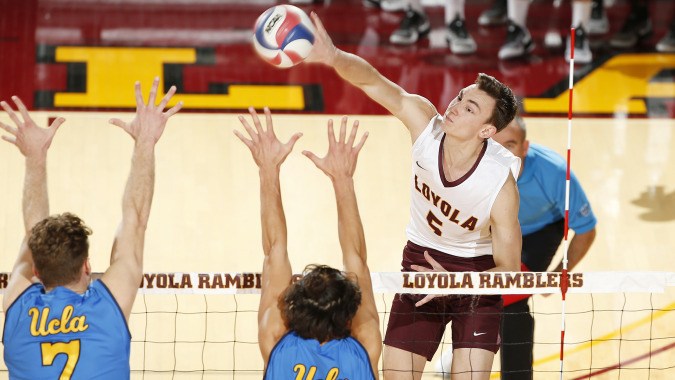 A balanced, high-scoring offense led Loyola-Chicago to a tough four set victory over BYU this weekend.

Ben Patch dominated the match, but it was not enough for BYU, posting 25 kills and eight digs. Jake Langlois added 14 kills, while setter Leo Durkin dished out a match-best 51 assists and five digs.

How It Happened
Loyola edged out to an early 9-7 lead on a Collin Mahan kill. BYU answered back with a 3-0 spurt that was capped off by a Ben Patch kill to jump in front, 10-9. Another Mahan kill helped spark a Rambler rally that saw the home side open up a 15-12 lead following Ben Plaisted’s first kill of the night. With the Ramblers holding a slim 21-20 advantage, kills from Mahan, Will Tischler and Paul Narup, along with a Cougar attack error, helped Loyola close out a 25-20 victory in the first set.

BYU opened up an 8-5 lead in set two following a Jake Langlois kill. The Maroon & Gold responded with three-straight points to even the score up at 8-8. The Cougars regained the lead, 10-8, after another Langlois kill and a Loyola attack error before Loyola took off on an 8-0 run that was sparked by a pair of Mahan service aces to surge in front, 16-10. BYU battled back to tie the set at 20-20 on a Rambler mishit but Loyola finished with a flurry as a Narup ace sealed a 25-22 triumph.

Narup registered the first three points of the third set for the Ramblers as Loyola raced out to a 3-0 lead. Patch tied things up at 6-6 as both sides struggled to gain separation during the middle stages of the set. Kills by Plaisted and Tischler bookended a solo block by Jeff Jendryk as Loyola forged in front, 18-15, and forced a Cougar timeout. BYU responded with a 4-1 rally to tie it up at 19-19. Plaisted gave the Ramblers a brief 20-19 edge but that would be Loyola’s final lead of the set as a Price Jarman ace cemented a 25-22 win for BYU that kept the Cougars alive.

The fourth set was a back and forth affair that featured 20 ties and 10 lead changes. Tischler’s third ace of the night saw Loyola open up a 14-11 lead. As was the case for most of the evening, BYU answered back as it pulled even at 15-15 on a Leo Durkin service ace. The Ramblers fought off a set point at 24-23 after Mahan ripped his shot just inside the line to make it 24-24. BYU would go on to survive six consecutive match points before taking a 31-30 lead on Patch’s final kill. Back-to-back spikes from Mahan and Narup put the Ramblers back in front, 32-31, and gave the hosts their seventh match point of the set. Loyola didn’t let it go to waste as Narup and Plaisted teamed up to deny Patch as the Ramblers claimed a 33-31 victory.

Inside The Box Score
– Mahan, Narup and Plaisted paced the Rambler attack on the evening as all three recorded 12 kills. Joining the trio in double figures was Tischler, who added 10 kills of his own.
– Plaisted registered 11 digs to notch his first double-double of the season.
– Ian Cowen also recorded a double-double as he continued his strong work in the setter role with 50 assists on the evening to go along with 11 digs of his own.
– Patch finished with a match-high 25 kills to lead the Cougars.

Up Next
Loyola wraps up a season-opening five-game homestand next weekend when it entertains No. 5 Pepperdine (Jan. 13) and Harvard (Jan. 14).