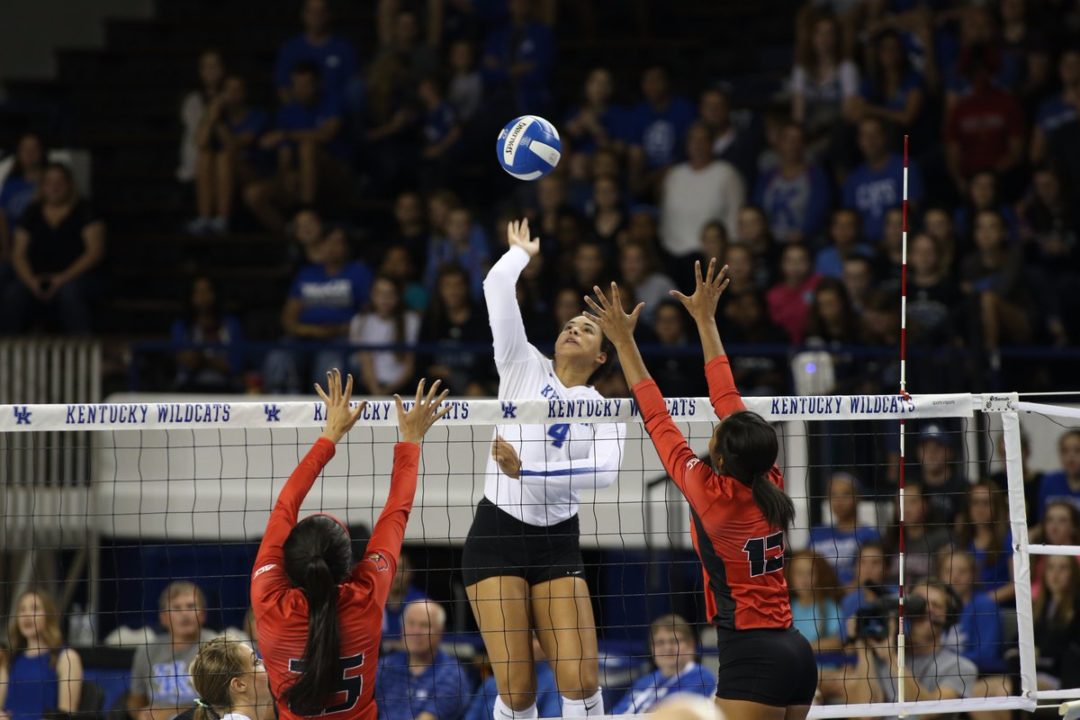 Lexington, Kentucky – In another edition of the Battle of the Bluegrass rivalry between Kentucky and Louisville, it was the 13th ranked Wildcats scoring a three-set sweep.

Freshman Avery Skinner was the only player on either side with double-digit kills, as she logged 15 on a .294 hitting percentage. That led the way for the Kentucky offense as they hit .258 as a team compared to .092 for Louisville.

A big part of the disparity in efficiency was the Wildcat defense, that had 46 digs and nine blocks compared to 39 and five respectively from the Louisville side.

Both sides now move on to play Kennesaw State in home matches (Saturday for Kentucky and Sunday for Louisville). Following that, both schools start up their conference schedules.

LEXINGTON, Ky. – For the fifth consecutive season, Kentucky will hold the distinction as the winner of the Bluegrass Battle. The 12th-ranked Kentucky volleyball team posted a 3-0 (25-20, 26-24, 25-11) sweep of visiting Louisville to extend its winning streak to five matches in the series. The Wildcats have also won seven of the last nine meetings since the series was renewed in 2009.

Freshman Avery Skinner and senior middle blockers Kaz Brownand Emily Franklin shined in the win in front of 3,402 fans in Memorial Coliseum. The win moves Kentucky to 8-2 on the season, while Louisville falls to 5-4. Kentucky will conclude nonconference action tomorrow night with a 6 p.m. matchup against Kennesaw State, coached by former UK assistant Keith Schunzel.

“We had a great day and it started in our walk-through this afternoon,” head coach Craig Skinner said. “Our energy and focus was good. I think they got out early, but it didn’t deter what we were trying to do. I was impressed with our defense tonight. Our defense came back and made a huge impact as the match went on.”

Skinner reached double-figure kills by the second set and finished with a match-high 15 hammers on the night. It’s the seventh time in the last nine matches that UK’s outside hitter has reached the double-figure platform. She’s accounted for 15 or more in four of those matches.

Brown and Franklin teamed up for 18 kills and nine blocks to pave the way for the Cats in the final rivalry match of their careers. Franklin blitzed the Cards for nine terminations on a blazing .571 attacking clip. She also added a season-high seven blocks in a three set match to lead the defensive charge. Brown tacked on seven kills on a .400 percentage and a pair of blocks.

Junior Brooke Morgan was a defensive stalwart for the Blue and White, contributing a career-high tying six blocks to the winning cause. She also chipped in with four kills and a dig.

Freshman setter Madison Lilley dished out 29 assists and added four digs and a pair of blocks. She directed the UK offense to the tune of 39 total kills on a .258 attacking percentage. Louisville managed just 30 kills on a .092 clip for the match.

Set 1
Louisville scored the set’s first two points before Edmond capitalized on an overpass. The Cards extended the lead to three at 6-3. A 3-0 spurt by the home team bookended by Skinner kills knotted the score at six apiece. The Wildcats would extend the run to 5-1 and take a 9-7 edge highlighted by a Morgan hammer. Louisville would not go away and eventually tied the score at 12, but Kentucky held the advantage 15-13 at the media timeout. Following the break, Skinner kept the momentum on UK’s side with a slam off the hands of Louisville’s blockers. Franklin split the block to lift Kentucky to a 20-18 lead – a cushion it would not relinquish. Morgan and Brown teamed up for a block and the visitors opted for a timeout trailing 21-18. Consecutive errors by Louisville lifted the Cats to a 25-20 opening set win. UK had 15 kills on a .265 led by seven kills from Skinner. The Cardinals logged nine kills on a mere .027 attacking percentage. Edmond and Watson both picked up four digs, while Morgan led the way with three blocks.

Set 2
After the Cardinals opened the scoring, Brown converted on a slide to immediately tie things at one apiece. Skinner put together a 3-1 run of her own, including her 10th kill of the night, to give UK a 4-3 advantage. A thunderous kill from Brown had the Wildcats out in front 9-7. Franklin helped UK extend the lead to three at 12-9 on another overpass conversion. The Cards took a timeout to attempt to taper the momentum building on Kentucky’s side. The home team built its largest lead at 17-12, benefiting once again from a Cardinals’ miscue. Louisville continued to fight back and eventually forced UK into a timeout after getting back to within two at 17-15. The lead shrunk to one as the Cardinals picked up a kill out of the break. It would take until 21-21 for the Cardinals to tie the score, but Skinner would quickly disperse of the threat with a kill down the line. UL staved off two set points by the Wildcats to tie the score at 24-24, forcing Kentucky into a timeout. Following the break, Louisville committed a service error and then Brown and Morgan teamed up for a monster block to lift UK to a 26-24 win. Kentucky charted 14 kills on a .250 attacking percentage with Skinner posting five kills and Franklin four. Dusek had eight digs. Louisville managed 16 kills on a .300 attacking percentage.

Set 3
The teams swapped points to begin the third stanza until UK broke free and gained an 8-4 lead following two early kills from Skinner. Brown tooled the block to extend Kentucky’s lead to five at 12-7. Another kill from Brown took UK into the media timeout up 14-9. Dusek broke the respite with an ace to stretch UK’s lead to six. That would spark another two points in favor of the home team with a kill from Skinner followed by a block from Lilley and Franklin to push the score to 17-9. Franklin and Morgan teamed up for consecutive Big Blue blocks to extend the lead to 22-10. Franklin kept the momentum flowing with another kill to stretch the lead to 13. The Wildcats finished the frame on a 12-2 run to capture the match by a 25-11 score. Kentucky posted 10 kills and four blocks in the final set, but limited the Cardinals to just five kills on a -.094 percentage. Franklin and Skinner teamed up for six kills, while the senior had four blocks in the set.

BY THE NUMBERS
.483 – Combined attacking percentage by UK’s middle blocker tandem of Brown and Franklin. They also teamed up for 16 kills
6 – Career-high tying blocks by Brooke Morgan
5 – Consecutive wins in the series by the Wildcats
4 – Of the last nine matches Skinner has posted 15 or more kills

University of Louisville sophomore Melanie McHenry had seven kills and an ace but the No. 12-ranked Kentucky Wildcats powered to a 25-20, 26-24, 25-11 win in college volleyball Friday night in Lexington, Ky.

“Kentucky is a great team and they passed really well tonight,” said UofL coach Dani Busboom Kelly. “They are hard to stop when they pass that well.  We did a nice job of fighting in the first two sets. It is always disappointing when you end the match like we did. The first two games we fought hard and made some nice plays.”

There were nine ties and three lead changes in a hard-fought second set.  Louisville was down 13-9 early but came back to tie at 20.  The teams traded points  with kills by Jasmine Bennett and Tess Clark staving off two UK set points and tie at 24. The Cards had a service error and UK was able to score for the 26-24 win in the second to take a two-set lead into the break.

“At the break, we just told them to keep pushing and the players wanted to do great but were unable to execute in game three,” said Busboom Kelly.

The Cards fell behind early in the third set and was plagued by -.094 hitting percentage. After making a short run with two straight kills by Tess Clark to come within five at 13-8 the Cats ran the table with a 25-11 win.

“We have Kennesaw State on Sunday and they are a good team. We have to have short memories and move on. I thought our offense looked really good at times and that was really good to see and we will build on that,” said Busboom Kelly.