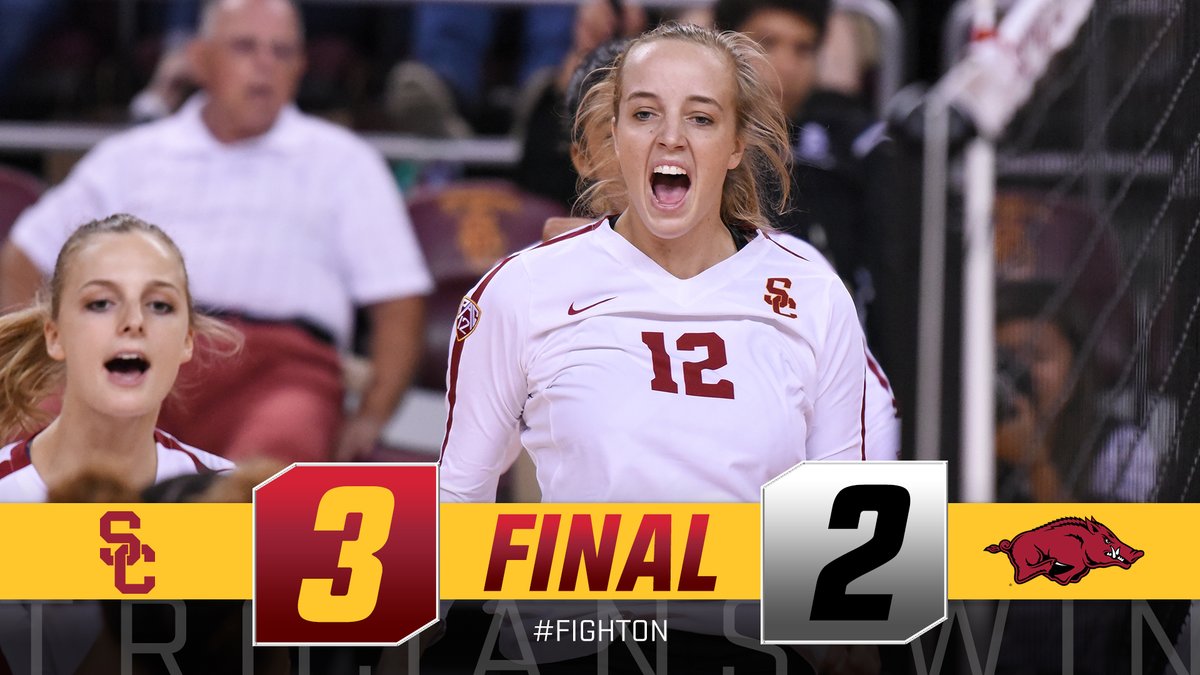 Santa Barbara, California – After falling behind 2-1 in sets and getting down in the fourth, USC staged a comeback to avoid the upset to a strong Arkansas side.

Arkansas jumped in front early behind a steady diet of assists coming off Pilar Victoria kills. The reigning SEC Offensive Player of the Week put down 29 in total for the match and added 15 digs, five blocks and four assists.

The Razorbacks led 12-8 in the fourth while holding the 2-1 set advantage, but USC would battle back to tie the match at 13 on a block by Jordan Dunn and Brittany Abercrombie. Those names came up several more times as beyond combining for 18 kills, Dunn had 10 blocks with Abercrombie totaling nine. It almost wasn’t enough though as the Trojans got behind again 22-20. They charged ahead for six of the last eight in the set to force a fifth.

USC raced ahead and held down the lead in the final set for the win as the Trojans hit .400 in the shortened set while Arkansas was held to a .120 clip.

In total for the match, both teams were relatively even as USC hit .176, had 71 digs and five aces as Khalia Lhanier led the team in kills (18) and was second on the team in digs (17). Arkansas on the other hand hit .168 with 69 digs and two aces as besides Victoria the only Razorback with double-figure kills was Hailey Dirrigl (14).

Now both teams move on to complete the UCSB Thunderdome Classic as USC challenges the host (UCSB) tonight and Yale out of the Ivy League tomorrow. That schedule is flipped for Arkansas, who has a quick turnaround to face Yale and meets UCSB tomorrow.