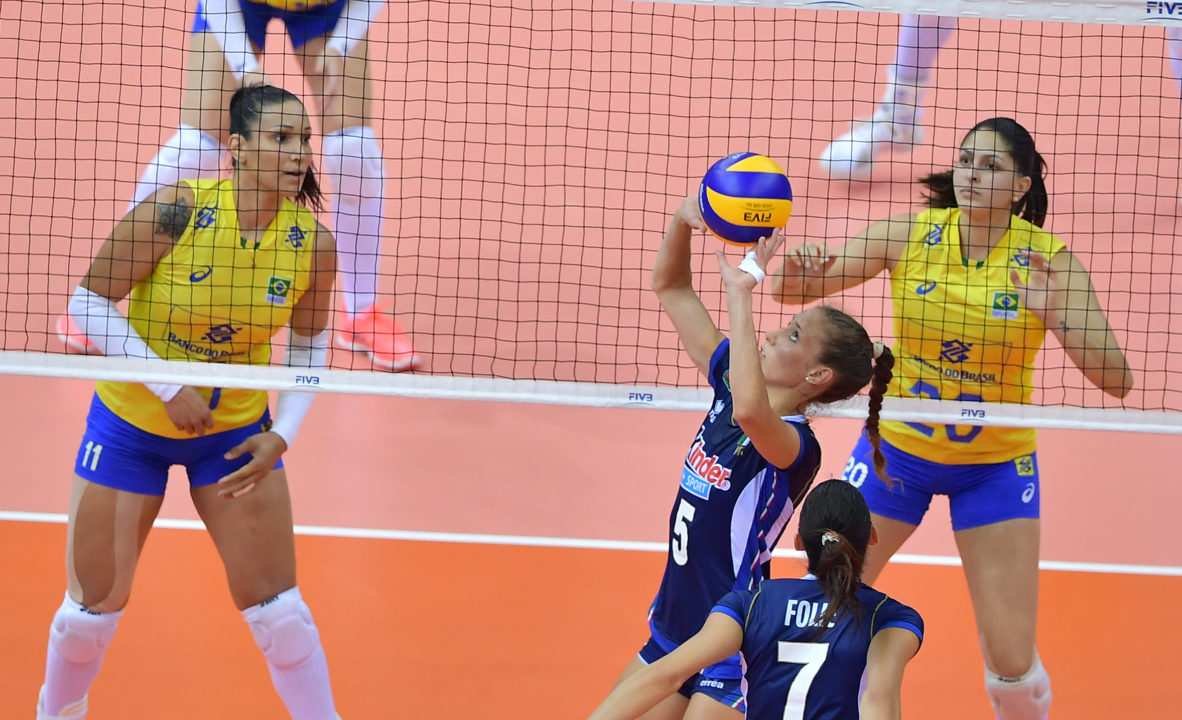 After leading Italy's young offense to a silver medal at the FIVB World Grand Prix, setter Ofelia Malinov will miss the European Championships with an injury. Archive Photo via FIVB

Two big names have been dropped from the Italian roster for the 2017 CEV Women’s European Volleyball Championship after a tumultuous week of preparations for Davide Mazzanti’s national squad.

The first drop was 22-year old opposite Miriam Sylla, a 6’0 hitter for club side Volley Bergamo, who failed a doping control test during the Final 6 of the FIVB World Grand Prix in early August. News of the positive test for clenbuterol came this week. While a second test for the same substance from a Serbian player from the same tournament has led to an appeal on the grounds of possible tainted consumed in China by both players, any decisions or appeals to the relevant doping authorities will come far too late for the September 22nd start date of the European Championships.

That forced Mazzanti’s hand to leave her off the team in spite of scoring 79 points at the Grand Prix (though she didn’t play in the silver medal game).

The more significant loss is 21-year old setter Ofelia Malinov, who organized the offense that allowed a young, inexperienced Italian team to emerge with junior superstars like Paola Egonu.

“It was a very difficult week for us,” the coach said. “Firs there was the problem with Miriam and then the injury to Lia. When bad things happen to you all at the same time, the first question that comes to mind is ‘why us?’

“I told the girls that asking this question doesn’t serve any purpose, rather the real question to ask is ‘what can we do now?’ There is great regret for Miriam and Lia, but those who are left have to think about what their teammates would have done if they had the opportunity to play in the European Championships.”

“I’ve said several times that ours is a group that is being discovered. All of these experiences will serve for us to grow further. Our motto does not change.”

While those two choices were thrust upon him, the coach had other decisions to make on the basis of form and performance, with the focus on their outside hitters and opposites. Mazzanti explained that he was forced to leave 6’7″ opposite Valentina Diouf off the team. He specifically thanked her for her effort to get back in physical shape after injury in time to participate, but says that “at this time, I feel that Indre Sorokaite is more useful to the team.”

He also opted not to bring Anastasia Guerra, another in an embarrassment of young riches for the Italian side. This means that in spite of rumors and speculation, other than the two changes of Malinov and Sylla being dropped, the Italian side will remain in-tact from the Grand Prix.

Carlotta Cambi will replace Malinov on the roster, though Alessia Orro is likely to be the team’s primary setter. Veteran Valentina Tyrozzi, a 31-year old hitter who has signed with Azzura Volley San Casciano in Serie A1 for next season, will replace Sylla.