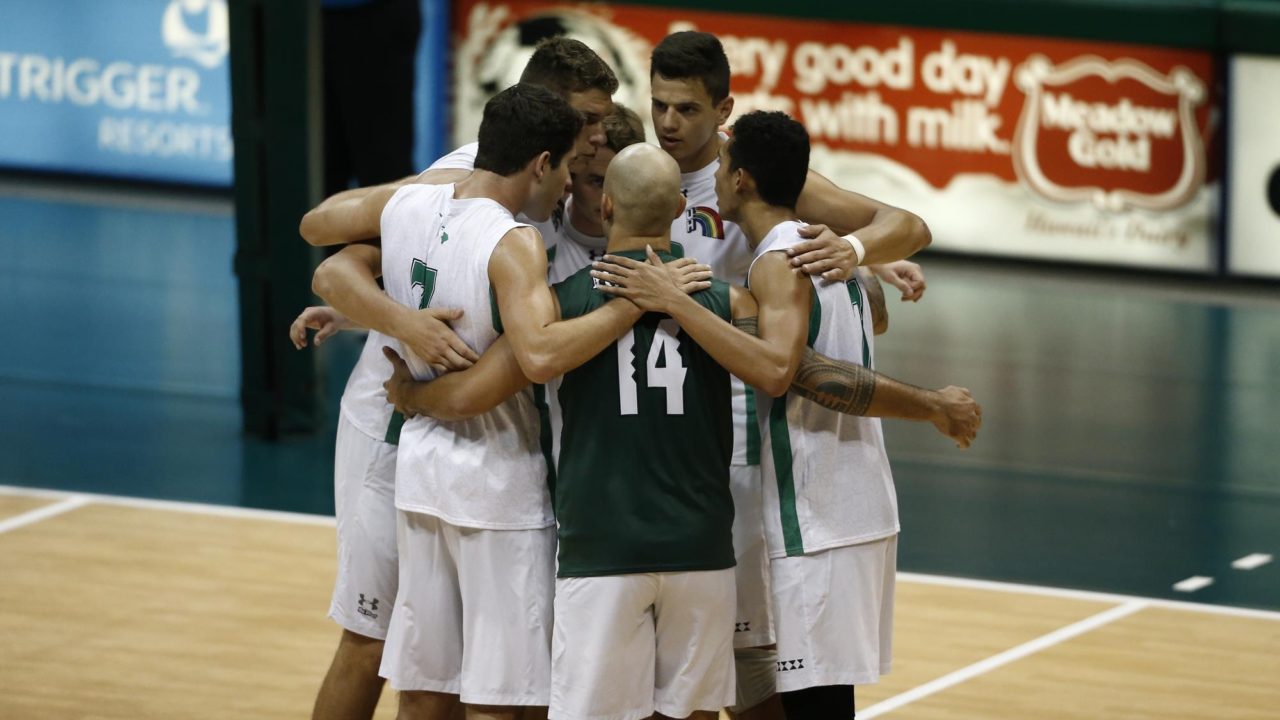 Hawaii showed a strong serve and offense in a sweep of fellow top-10 opponent Lewis. Archive Photo via Hawaii Athletics

Honolulu, Hawaii – To open up their host tournament, #2 Hawaii took down #8 Lewis in straight sets. The win was fueled by a strong serve and powerful attack, as the Rainbow Wahine tacked onto their overall resume while Lewis missed a chance to climb the ladder of teams in line for at-large bids should they not win their league.

In total, Hawaii hit .387 for the match while they posted the same amount of serve errors (eight) as Lewis with more aces (9-4). They kept Lewis out of system a bit more, which contributed to a .194 mark from the Flyers. Beyond that, blocks (6.5 to six, Lewis) and digs (23-21, Hawaii) were close.

Individually for the Rainbow Warriors, Stijn Van Tilburg (13 kill, .385) continued to roll with Austin Matautia (10 kills, .400) and Rado Parapunov (nine kills, .263) pitching in at a high level as well. Joe Worsley (35 assists, five digs) also won the battle of setters, and seemed to have stronger ball placement in the match.

In the losing effort for Lewis, Mitch Perinar (five kills, .444) and Dalen Instenes (five kills, .400) were efficient for the attack. However, there wasn’t enough punch and there were too many mistakes for the Flyers.

It was a bit disappointing for Lewis to not even take a set – and lose two of the games by sizable margins. They’ve had some boom and bust results this year though, so don’t be surprised if they bounce back strongly. Ryan Coenen (11 kills, seven digs, two aces) gave the team high totals, but was riddled with nine attack errors and hit just .069. The combination of that – for someone who took 29 of the team’s 72 attempts – and Kyle Bugee‘s four reception errors exemplified the issues on the day for the Flyers.

This was only the beginning of the Outrigger Hotels and Resorts Invitational too, as Hawaii takes on #15 Penn State tomorrow and #5 BYU on Saturday while Lewis plays the same two but in an inverse of days.

The Rainbow Warriors (12-2) extended their win streak in the Outrigger Invitational to seven matches dating back to 2016.

Outside hitter Stijn van Tilburg led the Warriors with a match-high 13 kills, hitting .385. Austin Matautiaadded 10 kills, on .400 hitting, and four service aces while Rado Parapunov tallied nine kills and three digs. UH hit .387 for the match and had nine aces.

UH’s serving came out strong to start the match as Matautia recorded three straight aces and Dalton Solbrig added another as the Warriors jumped out to a 9-3 lead. The advantage was 15-6 at the media timeout and UH doubled-up the score at 20-10 after a Patrick Gasman-van Tilburg double-block. The Warriors hit .433 for the set as van Tilburg finished with seven kills.

Lewis scored the first three points of Set 2 but the Warriors rallied, eventually taking their first lead at 10-9. Lewis tied it four times and took a 21-18 lead with a 5-0 run that included an overturned call on replay challenge. After the teams traded points, the Warriors closed out the set by scoring the final six points with a kill by Gage Worsley regaining the lead for UH and Gasman stuffing the final two points.

UH held the lead for the early part of Set 3 until a ball handling error on Joe Worsley gave Lewis a 13-12 lead. The teams battled back-and-forth until the Warriors scored seven straight, which included a pair of Worsley aces and two kills by Matautia, for a 23-17 lead. Van Tilburg ended the match with his 13th kill.

Day two of the tournament continues on Friday with BYU versus Lewis at 4:00 p.m., and Penn State and Hawai’i to follow at 7:00 p.m.

Hawaii’s (12-2) defense held the Lewis offense to just 30 kills in the match and held them to a .194 hitting percentage in the match.

The Flyers opened the match with a pair of blocks from Mitch Perinar (Channahon, IL/Minooka) and TJ Murray (Barrington, IL/Barrington) to take a 2-1 lead but the Rainbow Warriors took control with a 9-2 run highlighted by four service aces from Austin Matautia and Dalton Solbrig. Lewis cut the deficit to six points on a couple of occasions but was unable to get any closer than that the rest of the frame as Hawaii ended the set on a 13-6 run.

The Flyers led 3-0 to begin the second set but the Rainbow Warriors came back and eventually grabbed a 12-10 lead on a kill from Stijn van Tilburg. The two teams went back and forth before Hawaii took an 18-16 lead on a kill from Solbrig and a block from van Tilburg and Solbrig. Lewis responded with five straight points to regain its three-point advantage highlighted by a pair of aces from Coenen. After a timeout, the Rainbow Warriors closed the set scoring seven of the last eight points to rally for the 25-22 win.

The Flyers led late in set three after a block from Murray and Matt Yoshimoto(Ventura, CA/Adolfo Camarillo) but was unable to close it out as Hawaii ended the match on a 9-2 run to win 25-19. Coenen had six kills in the frame while Dalen Instenes (Racine, WI/William Horlick) and Julian Moses (Atlanta, GA/Atlanta International School) had three and two kills respectively.

The Rainbow Warriors recorded 42 kills in the match and hit .387 for the contest. van Tilburg led the way with 13 kills and Matautia added 10 kills. Joe Worsley distributed 35 assists and had five digs along with Larry Tuileta.

Lewis continues play in the Outrigger Invitational on Friday when it takes on fourth ranked BYU at 8 p.m. (CST). The Cougars defeated the 11th ranked Penn State Nittany Lions in five sets on Thursday.