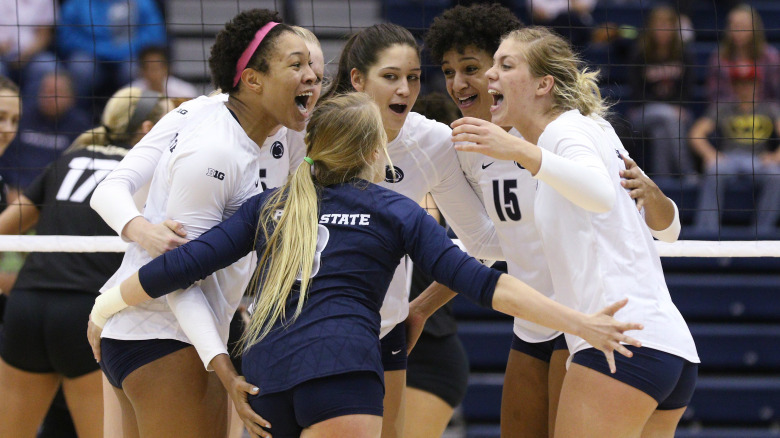 #2 Penn State overcame a 2-1 set deficit and stormed back for a five-set win in a match that Simone Lee reached 1,000 career kills. Archive Photo via Craig Houtz/Penn State Athletics

Columbus, Ohio – The Nittany Lions overcame a 2-1 set deficit on the road to storm back and earn a five-set conference win. Any match in the Big Ten isn’t easy, showed in this one as Penn State did ultimately improve to 4-1 in conference action.

All-American Simone Lee was fantastic in the match for Penn State as she totaled 18 kills (.325) and 10 digs to lead an offense that hit .333. She also hit a career milestone in surpassing the 1,000 career kills mark.

She was prevalent in set one along with fellow 2016 All-American Haleigh Washington (20 kills, .500, eight blocks for the match). The pair helped Penn State roll to a 25-13 set victory as it looked to be an easy win for Penn State.

However, things quickly shifted as Ohio State fed off the home crowd and pulled ahead late in set two. After giving up the lead, they stormed back in front and took the set 25-23. Things weren’t easier in set three after taking some momentum, as the two teams battled into extra points. Behind Luisa Schirmer‘s volume of attacks (18 kills, nine digs for the match) to go with Bia Franklin‘s efficiency (10 kills, .450, nine digs) and Taylor Hughes aggressive play as the setter (50 assists, seven digs, six kills), Ohio State scathed out a 30-28 set win for a 2-1 lead.

The Nittany Lions took the two close set losses personally and took out their frustrations on the Buckeyes in set four, crushing Ohio State 25-9. From there, Penn State had it rolling and Ohio State couldn’t regain their form as the Nittany Lions went up 9-1 in the fifth. By the time Ohio State bounced back in the final set, it was too late in the shortened action as Penn State won 15-7.

The team stats ended more unbalanced then the five-set match would indicate, as the three sets won by Penn State were all blowouts. They held Ohio State to a .197 mark as a team, posted more aces (7-3), less serve errors (4-8), more digs (58-54) and were the clear blocking winner. The win is big with Penn State trying to keep pace of Nebraska, while Ohio State looks to be a NCAA Tournament bubble team.

Moving on, Ohio State has one more home match for the week as they face conference bottom-dweller Rutgers. Penn State on the other hand stays on the road to face an upstart 13-4 Maryland squad tomorrow.

It was a battle through and through as a ruckus St. John Arena crowd filled the air with roars and cheers. The Nittany Lions and Buckeyes took shots and swings and defended for five tough matches.

Ultimately, Penn State took a commanding win in the fourth set, 25-9, and sucked the mojo right out of the arena. Their gained momentum led to a dominant fifth set where the Nittany Lions jumped out to an 8-0 lead into the switch. Penn State elevated and executed to seal the win in five sets.

Simone Lee (Menomonee Falls, Wis.) became the 27th member of Penn State’s 1,000 kill club with her seventh kill which happened early in the second set. Lee joins Ali Frantti as active members of the club. Lee finished the evening with a double-double, putting down 18 kills, adding 10 digs, and three blocks.

Haleigh Washington (Colorado Spring, Co.) was explosive on the evening, recording a career-best 20 kills to lead the team on a clip of .500. She added eight blocks and two digs defensively.

The Nittany Lions got an all-around exciting effort from Tori Gorrell (Oakville, Ontario) who tallied six kills and tied her career-high with eight blocks.

Defensively, Kendall White (Indianapolis, Ind.) set the note for the match as she opened up the game with six digs in the first set, and finished with a game-high 19. She also dished out two aces and two assists, while making the incredible hustle plays.

Penn State put down 68 kills on .333 hitting as a team and registered 17.0 blocks as a team. Ohio State only registered 4.0 blocks, and the Nittany Lions neutralized the Buckeyes in the final set, holding them to .000 hitting.

Luisa Schirmer had 18 kills and nine digs in the outing. Ana Beatriz Franklin chipped in 10 kills and nine digs, both of which are new career highs. Taylor Hughes added a match-best 50 assists, her second time this season with at least as many. Hannah Gruensfelder notched 19 digs. Ashley Wenz (9), Ayanna Swan (8) and Lauren Witte (8) also tallied kills for the Buckeyes.