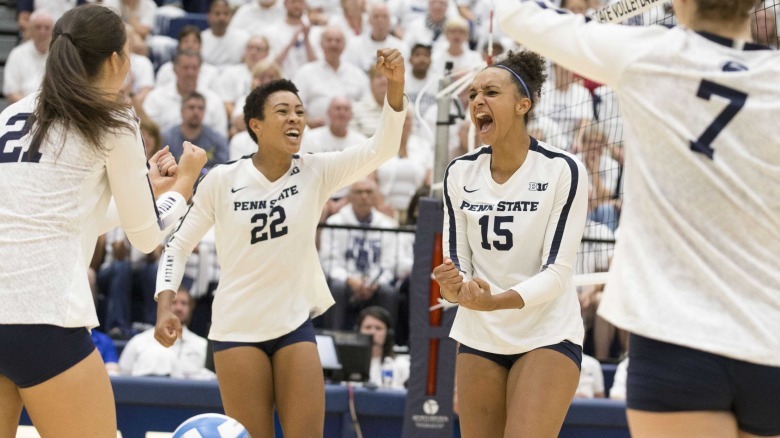 It’s not just a Friday, but it’s Friday the 13th in October! And there are some scary good matches to go with it. In total, 13 ranked teams and another nine ‘on the cusp’ in the latest VolleyMob Top 25 are in action on the day as the Big Ten and Pac-12 have a big hand in that. That’s where we start off with our match of the day as the Big Ten holds a top 10 matchup.

Two of the top three teams in the Big Ten standings and in the top 10 of the country meet in University Park, Pennsylvania with plenty on the line for the Big Ten title race. That became even more apparent with a Nebraska loss yesterday, giving everyone in the conference at least one tally in the loss column.

Besides falling to Nebraska at home in straight sets, Penn State has won all of their other Big Ten matches. They are looking to keep pace with Nebraska at the top now, but first things first they will need to down Michigan State in a battle for second. The Nittany Lions offense will look to keep clicking as they have the best hitting percentage in the conference led by Haleigh Washington, whose .509 leads the country.

Michigan State has emerged as a true contender after suffering a few setbacks in non-conference play, likely attributed to their senior-laden crew that stays calm, cool and collected. They already have three top 10 victories, so they’ve been a giant killer already as two of those came on the road. They’ll look for Alyssa Garvelink to help slow down Washington, as Garvelink averages 1.58 blocks per set to go with her 2.42 kills per set on offense.

Just a pair of teams remain undefeated in American Athletic Conference play in SMU and Wichita State as now they meet in Wichita, Kansas. It goes beyond the fight to stay unbeaten, as SMU is the incumbent conference champion facing the ‘new kid on the block’ as Wichita State is off to a strong start in their inaugural season as an AAC member.

The defending National Champion Stanford Cardinal are rolling to start Pac-12 play as they’ve won all six matches and swept five of those opponents. This will be one of their tougher ones though as they travel south to Los Angeles where UCLA feels like they have Stanford’s number after defeating the Cardinal in both meetings last season.

Two teams that are recognized as some of the best in the country but have struggled in the rugged Pac-12 meet up in Pullman, Washington. The Ducks are fresh off a five-set loss to Washington and have lost three of four while Washington State has hit the same rut. It’s not an indication of the teams, but more so the difficult conference as this one gives an opportunity for a much needed win for both sides.