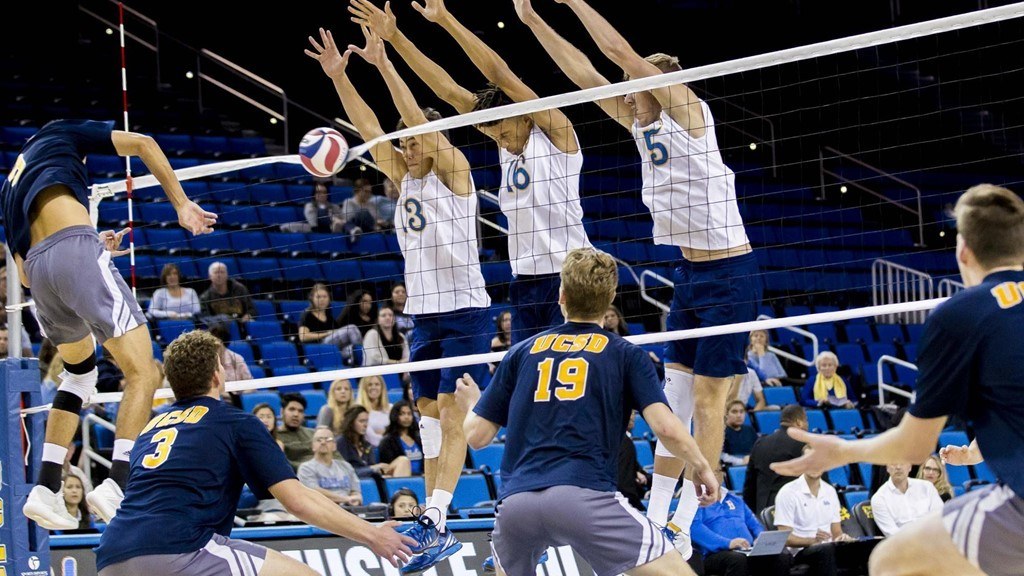 The No. 2-ranked UCLA men’s volleyball team captured a straight set win over UC San Diego in an MPSF match played on Saturday night in Pauley Pavilion. Scores of the contest were 25-15, 25-13, 25-17.

UCLA hit .557 for the match and registered nine aces on the night, a school record-tying seven coming in the second set. Mitch Stahl and Micah Ma’a led the way from the service line with four and three aces, respectively, on the night. Jake Arnitz and JT Hatch tied for match-high kill honors with nine each. UCLA is now 4-1, 2-0 on the season and will host Cal Baptist next Wednesday night at 7:30 p.m. in Pauley Pavilion.

UCLA quickly moved to a 5-1 lead in set one behind three kills from Arnitz. The Bruins led 16-9 after a Daenan Gyimah kill and block. Arnitz scored with his left hand for a 24-15 edge and Ma’a ended the set with a kill for a 25-15 win. The Bruins hit .789 in the set with no errors on 19 swings and recorded 15 kills.

Set two was tied at points 4, 5 and 6 after Stahl had opened the set with a pair of service aces. UCLA grabbed a 11-7 lead on a Hagen Smith kill, Ma’a served up back-to-back aces and then later added a third for a 15-7 advantage. Christian Hessenauer came off the bench to tally five kills in the set and one of his smashes lifted the Bruins to a 22-12 lead. An Arnitz ace gave the Bruins seven in the set, which tied the school mark established in 1993 against Stanford. UCLA closed out the set at 25-13.

Arnitz (.571) also tallied an ace and three blocks. Hatch (.692) led the Bruins with seven digs. Hessenauer (.556) finished with six kills. Ma’a added 21 set assists and Jackson Bantle made five digs. Smith had a block solo, and ace and five kills to go with his 14 set assists. The Bruins finished with a 9-3 service ace edge and a 6.0 to 3.0 total team block margin.