2018 Women’s European Volleyball League: On to the Final Round 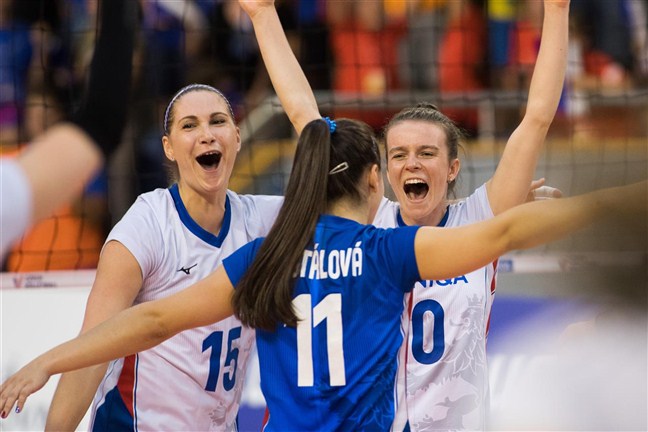 Czech Republic finished out their undefeated pool play as we now head to the Final Four of the 2018 Women's European Volleyball League. Archive Photo via CEV

Things are moving on to the Final Round at the Women’s European Volleyball League after pool play wrapped up today. That sends four teams to the semifinals to compete for the tournament victory. Those teams that made it along with pool results can be seen below.

Both Bulgaria and Azerbaijan earned victories on the last day of action, and both in sweep form. The only chance that Azerbaijan would have garnered the edge was with a 3-0/3-1 victory and a Bulgarian loss/3-2 victory. Adding on to the unfortunate circumstance for Azerbaijan, who posted one of the top three records in pool play, is that they won’t be in the Final Four. That is because hosting nation Hungary didn’t win their pool and is taking up the fourth spot behind the trio of Pool victors.

Hungary had already secured a spot in the Final Four as hosts, but still almost spoiled Finland’s chances of making it in. Instead, Finland’s loss came in five, giving them the one point they needed to secure Pool B and punch a trip to the next round. Had they lost in three or four sets, they would have finished second in the pool and the bid that Hungary would have taken over would have slid on to Azerbaijan.

Czech Republic completed their undefeated mark in pool play, serving as the only team in the Golden or Silver league to do so. The result didn’t always seem so sure, as the Czech side knew they had the pool already wrapped up, and eased along to a tight five-set victory. The lack of a top tier second place team may have helped in them going 6-0, but they will go into the Final Four as the favorite

Estonia was able to hold their one-match lead on Sweden to round things out in Pool A, although it didn’t matter much as both teams were headed into the Final Four regardless. Still, now they get the weaker (albeit still 5-1) second-place team in Pool B for their final round matchup. Sweden meanwhile is the host of the event and although they will hold the worst record of the four teams, could get that extra boost to earn a pair of victories.

Austria and Albania had already locked in spots to the Final Four in the Silver League, but continued their strong play with victories over the bottom half of Pool B. Things were a bit more challenging for Austria in four sets, but they still wind up winning the Pool, meaning they will take one the Pool A runner-up as opposed to the Pool A winner, like Albania. It’s very possible these two could meet again though for the Silver League Championship and to settle the 1-1 tie.