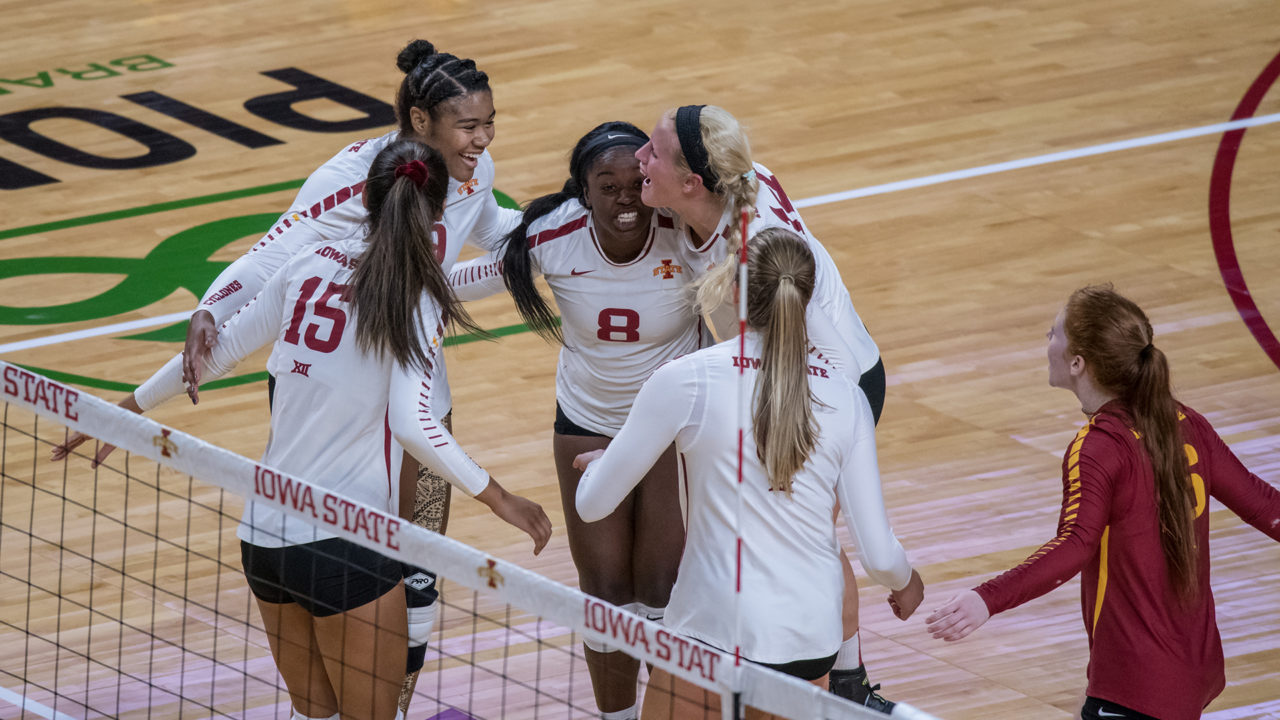 Manhattan, Kansas – #23 Iowa State went into a hostile road environment in the Big 12 and downed Kansas State in a three-set sweep. The win gives the Cyclones three in-a-row as they stay in the top four of the Big 12.

Iowa State proved to be just a little bit better in most facets of the match, as they out-hit Kansas State .226 to .182 and had more blocks (6-4). Part of that was due to an aggressive serve that saw Iowa State log six aces to eight serve errors including plenty of balls that put the Wildcats out of system.

The match started in Iowa State’s favor early as they jumped all over Kansas State in the first at 7-1. That only continued to a 25-18 set victory.

That wasn’t the case in the second with things tight until Iowa State pulled ahead 22-16. However, an 8-2 Wildcats run tied things at 24. The Cyclones collected themselves though with kills by Avery Rhodes (two kills, four blocks) and Grace Lazard (team-high 12 kills, .524) to end the set.

Kansas State looked ready to respond in the third with a 9-5 edge, but a 7-2 run for Iowa State switched the lead to the Cyclones way. From there, things went back-and-forth to a 21-21 tie. Two straight for the Cyclones gave them two set point chances, with the second coming at 24-23. That’s when Monique Harris (37 assists, three kills) and Rhodes combined for a block to end the match in a 3-0 sweep.

Next up, Iowa State gets the other Kansas school in the Jayhawks, although that one comes back in Ames against the #9 team in the country. While Iowa State switches from being on the road to going home, Kansas State does the opposite as they head South to Lubbock to take on Texas Tech on Saturday.

First Set: Iowa State 25 Kansas State 18
Kansas State committed unforced errors on the first three points to give ISU an advantage it would not relinquish in the set. The Cyclones rejuvenation from behind the service line continued, as the Cyclones got two aces to help drive the effort. When ISU did have to go on the attack, Grace Lazard was the pick of the bunch, posting six kills and a .857 hitting clip. Iowa State got ahead 1-0 when Lazard recorded her sixth kill of the frame at 25-18.

Second Set: Iowa State 26 Kansas State 24
Both teams struggled to find its footing in the attack to begin the second frame. ISU turned to Samara West, who fired off six kills in ISU’s first 14 points as the Cyclones got ahead 14-10. Iowa State’s lead was at 22-16, but K-State went on a 5-0 run to cut it to a single point. K-State fought off an ISU set point at 24-23, but the Cyclones converted on the second try as Lazard’s 10th kill of the night made it 26-24 ISU.

Third Set: Iowa State 25 Kansas State 23
A pair of Kylee Zumach aces got the home side a 3-0 lead, and took advantage of a struggling Cyclone attack to build a 9-5 lead. Iowa State battled back, pushing ahead at 11-10 on back-to-back Jess Schabenaces. The set featured 12 ties and five lead changes, but ISU eventually got ahead for good at 22-21 when Alexis Conaway won a 50-50 at the net. K-State survived ISU’s first try at match point, but ISU took care of business on the second match point when Monique Harris and Avery Rhodes combined to deny Zumach at 25-23.

Player of the Game
Grace Lazard. The defending Big 12 Defensive Player of the Week only had one block, but did plenty of damage in the attack. The junior from London tied a season-high with 12 kills, which she earned at a season-best .524 hitting percentage.

Up Next
Iowa State returns to Hilton Coliseum on Saturday for a ranked showdown against No. 11 Kansas. First serve between the Cyclones and Jayhawks will be at 7:30 p.m., with Cyclones.TV Powered by Mediacom televising the match.

Fans who can attend the football game on Saturday can present their ticket at the Hilton Coliseum Ticket Office for $2 tickets to the volleyball match. Saturday’s match is also Iowa State’s “Dig Pink” match, with fans encouraged to wear pink to promote breast cancer awareness, and celebrate those who have defeated breast cancer. For more information about ISU’s Cut-A-Thon happening on Saturday to donate hair for childhood cancer, click here.

MANHATTAN, Kan. – Redshirt junior outside hitter Kylee Zumach was the only player for K-State to reach double-figure kills as the K-State volleyball team fell to No. 22 Iowa State in straight sets Wednesday night at Ahearn Field House, 18-25, 24-26, 23-25, in front of a nation television audience on ESPNU.

“I thought we were significantly better than we were the first time we played them,” head coach Suzie Fritz said after the match. “Our first-swing offense was incredibly efficient, but our transition offense was not very good. I think they have something to do with that, too, they’re one of the best defensive teams in the league. That’s both front row, back row and the effectiveness of their serving. Defensively, they do a lot of things well.

“I did not think that we won the serve-and-pass battle,” added Fritz. “I thought that’s probably where it got away from us the most and I think we lost it in transition. As the rallies got longer, they (Iowa State) got better and I think that’s an area we can upgrade.”

K-State did not grab its first lead until scoring the first three points of the third set, courtesy of two Zumach aces to begin the frame. In Set 2, the Cats battled back from as many as six down to tie the set six different times and as late as 24-24. ISU claimed the opening set in wire-to-wire fashion.

The Cyclones were led by middle blocker Grace Lazard and her 12 kills and .524 attack percentage. Outside hitter Jess Schaben added 10 kills and 12 digs while libero Hali Hillegas had a match-high 20 digs.

ISU scored seven of the match’s first eight points, quickly prompting a Wildcat timeout. K-State clawed back in the set and cut the Cyclone lead to four points at 21-17, but Iowa State ended on a 4-1 run. Carlson had four kills in the set on seven swings while Zumach and Macy Flowers each added three. As a team in Set 1, K-State hit its highest efficiency at .235.

A 5-0 Wildcat run late in Set 2 helped level the score at 23 and again at 24, but K-State never managed to completely overcome the deficit and fell in extra points, 26-24. Zumach had four kills in the set and senior Bryna Vogel had three of her four kills in the second.

The final set was a back-and-forth affair, as it held 12 tied scores and five lead changes. Zumach’s 10th kill fended off match point for K-State, but Iowa State completed the sweep and held the Cats to a match-low .098 in the set. The Wildcats picked up three of their four aces on the night in Set 3.

K-State travels south to Lubbock, Texas, for its second meeting with Texas Tech (13-9, 2-7 Big 12) on Saturday at 1 p.m. The Wildcats took the season’s first meeting from TTU in five sets in Manhattan. The match will stream live on TexasTech.TV while fans can also listen to Rob Voelker call the action live on K-StateSports.com.