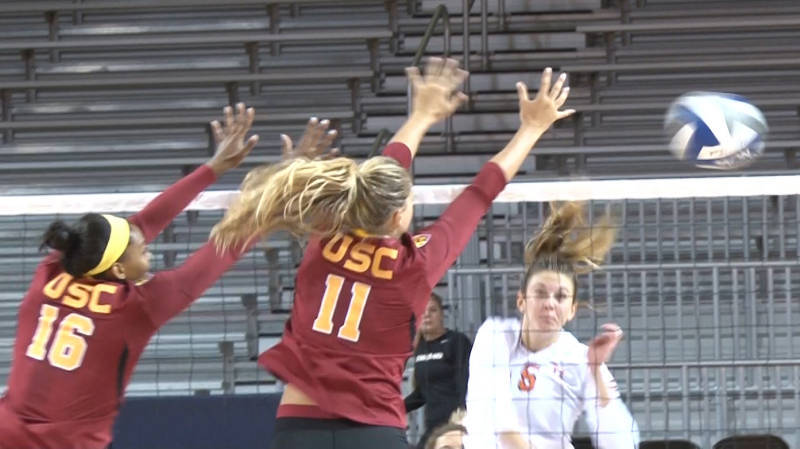 No. 24 USC swept Sam Houston State in their first match of the Rice Adidas Invitational I 25-18, 25-20, 25-15. This marks the fourth straight win for USC after dropping their first three matches of the season.

HOUSTON — The 24th-ranked USC women’s volleyball team (4-3) defeated Sam Houston State (4-4) in a three-set sweep (25-18, 25-20, 25-15) in the first match of the Rice Adidas Invitational I at the Tudor Fieldhouse on Friday, Sept. 9. The Women of Troy won their fourth straight match since opening the season with three consecutive losses.

Four Trojans scored in double digits led by freshman outside hitter Khalia Lanier (13.5 points) who had 11 kills (3e, 27att, .296) to go with nine digs, a service ace, and two blocks (one solo). Sophomore outside hitter Alyse Ford (11.0 points) added 10 kills (2e, 19att) with a .421 hitting percentage and 10 digs for her first-career double-double. Ford also had one of USC’s eight service aces.

The Women of Troy never trailed in the first set and opened up a lead as large as 10 points on several occasions before closing out the 25-18 win. The Bearkats led for much of the second frame but the Trojans caught them at 17-all and finished off the win, 25-20, on a kill by Ruddins. USC rolled out to a 7-1 lead to open the third set, and then broke things wide open with a 12-point lead at 20-8. USC gave no quarter as it polished off a 25-15 win for the sweep.

Up next, the Trojans face Oakland (4-3) at noon CT (10 a.m. PT) on Saturday, Sept. 10. USC then concludes the Rice Invitational against the host Owls at 7 p.m. CT (5 p.m. PT). The final match will be streamed live for a fee on ConferenceUSA.com.

HOUSTON – The Sam Houston volleyball team continued their month-long road trip to start the season Friday afternoon at the Rice Adidas Invitational with a 3-set loss to No. 24 USC.

After dropping the opening set 25-18, the Kats came out looking much better in the second. The set featured 8 of the 11 total lead changes in the match, and Sam Houston led as late in the set as 17-16.

But the Trojans rattled off four straight points and never looked back taking the second set 25-20. USC closed out the match with a 25-15 win in the third set.

“I thought there were stretches there where we really competed with them,” said head coach Brenda Gray. “What an opportunity to face a team like USC and we were looking forward to the chance.”

Amanda Gooch led the way for the Bearkats with 8 kills. Jordyn Vaughn and Taylor Cunningham each had seven kills, while Breanna Homer and Clair Kilpatrick each had an ace.

“I really do like what I’m seeing so far from this team,” Gray said. “We have competed in every match we have played this year, and that really all you can ask.”

The Bearkats will be back in action Saturday morning as they take on Rice at 10 a.m. and then wrap things up with Oakland at 5 p.m.