#3 BYU Rolls Through #8 Stanford In A Three Set Sweep 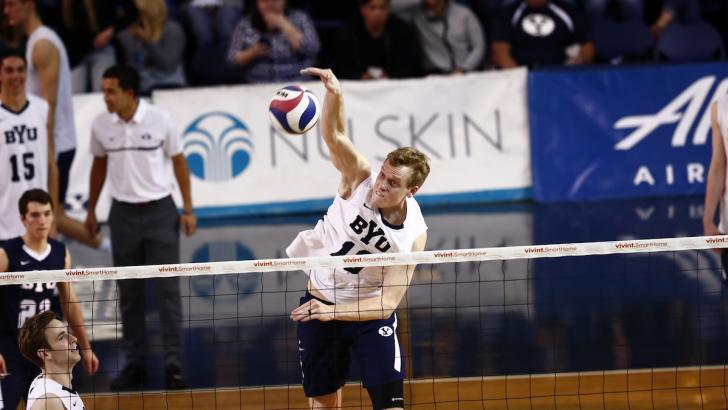 The #3 BYU men’s volleyball team takes down #8 Stanford in a three set sweep, without First Team All-American Ben Patch. Patch hasn’t stepped foot on the court since February 4th with a groin injury. This is the first game of a double-header between the two teams this weekend.

BYU took down the Cardinals in a close, competitive match up, with the score staying consistent across each set, but their 42-33 kills and 17-9 blocks kept them ahead of Stanford.

For Stanford, Gabriel Vega put down 10 kills and seven digs. Evan Enriques picked up 12 digs in the back court while Kevin Rakestraw blocked four balls.

“Tonight was a great team performance,” BYU head coach Shawn Olmstead said. “As a team, we’ve been working each day in practice to improve on a few things, and I thought we made progress there.”

Jake Langlois led the Cougars with 14 kills on a .375 clip. Leo Durkin set the team with 32 assists while Erik Sikes chipped in eight digs. Brenden Sander had 10 kills and Tim Dobbert contributed nine kills, eight blocks and four blocks in the win.

BYU (13-2, 7-1 Mountain Pacific Sports Federation) took an early 7-4 lead in the first set against Stanford (9-6, 6-4 MPSF) with help from a Durkin service ace. A Dobbert kill extended the Cougars’ advantage to six at 12-6. The Cardinal countered with a 4-1 run to come back within five, trailing 16-11, to force a BYU timeout. Another Dobbert kill put the Cougars ahead 21-15, but Stanford scored four of the next five points to keep within striking distance, down 22-19. BYU stayed ahead, however, with Langlois ending the set with a kill 25-21.

The Cardinal took a 5-2 lead to start the second set after a poor offensive start from the Cougars. A 6-2 BYU run, fueled by a pair of Sander kills, pushed the Cougars out front 8-7. Another BYU run, this time 4-0, gave the Cougars a 13-10 advantage. Sander and Joseph Grosh teamed up for a block that extended BYU’s lead at 18-14 and back-to-back-to-back Sander kills kept the lead at 21-16. Stanford fought off two set points with the Cougars up 24-18, but a Langlois kill ended the set 25-20.

The Cardinal used a 7-2 run to take a 9-5 advantage at the beginning of the third set. Kills from Dobbert and Langlois brought BYU within two, down 10-8, before a Grosh kill evened the score at 11-all. The score was tight from there as a Wil Stanley ace gave the Cougars a two-point edge, up 18-16. A Dobbert service ace gave BYU match point at 24-20, and a Stanford attack error ended the set and match 25-21.

The Cougars return to Maples Pavilion Friday, Feb. 24, at 7 p.m. PST for a rematch with the Cardinal. The match will be streamed live on Pac-12.com. Links to live stats and the video feed can be found on the BYU men’s volleyball schedule page.

The Cardinal was led offensively by Kevin Rakestraw, who hit .500, but was unable to find the middle more often as he had just five kills on eight swings. Redshirt senior outside hitter Gabriel Vega was the only Cardinal with double-digit kills, totaling 10 to go with seven digs.

BYU was led by senior Jake Langlois, a native of San Jose, California, who recorded a match-high 14 kills on .375 hitting. Junior outside hitter Brenden Sander chipped in with 10 kills on .438 hitting and three blocks.

Stanford and BYU will meet again on Friday, Feb. 24 at 7 p.m. in Burnham Pavilion. Admission is free.

Correction Freshman setter Paul Bischoff for Stanford had 35 assists against BYU, not 18 check the stats for the match

Hey Grandfather Paul – this is the recap for Thursday’s game, where grandson Paul only had 18 assists. The recap for Friday, with the 35, should be going up soon! http://byucougars.com/files/15stanford.pdf