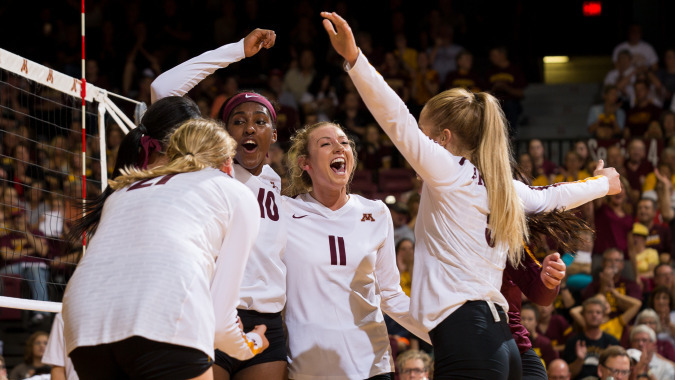 #3 Minnesota stayed focused with #4 Texas on the ledger as they swept Texas A&M Corpus Christi for a 7-0 start. Archive Photo via Minnesota Athletics

Austin, Texas – The third ranked Minnesota Golden Gophers were able to avoid looking ahead to their meeting with Texas as they remained focus and swept Texas A&M Corpus Christi.

Minnesota came out in the first set with their highly efficient offense as they hit .333 and held Texas A&M Corpus Christi to a .140 clip even though the Islanders collected more kills (14-13). The Golden Gophers had plenty of balance as well as four players had multiple kills in the opening set, led by Stephanie Samedy and Alexis Hart, who each notched four. The strong start for the pair continued throughout, as they were first and second on the team respectively in kills with 11 and eight.

Set two was even better for Minnesota as they hit .429 in the second to a .167 mark for Texas A&M Corpus Christi. This time, the Golden Gophers didn’t waver in total kills as they dominated the category 15-9.

The third and final set didnt’ feature quite the offensive prowess as some new names entered the match for Minnesota, but the Golden Gophers did tighten up the defense as they posted five blocks in the set.

That final set of blocking gave Minnesota a 10-4 edge in the block department for the match as the Golden Gophers also hit .297 to Texas A&M Corpus Christi’s .134 and and sided the Islanders out at a 71.7% clip.

Beyond Samedy and Hart, Molly Lohman stood out with seven kills (third on the team) and four blocks (tied with Samedy for most on Minnesota). All-American Samantha Seliger-Swenson paced the attack with 34 assists and also added 11 digs for a double-double. Minnesota now gets ready for arguably the match of the week as they take on #4 Texas in Austin for a top-five showdown.

Texas A&M Corpus Christi dropped both of its matches on the day after taking on Texas earlier in the day. They’ll look to get off the schneid for the trip against Denver tomorrow when they will look for Brittany Gilpin to repeat her performance after leading both teams with 13 kills in this match.

The No. 1 University of Minnesota volleyball program earned its second sweep of the day when it defeated Corpus-Christi, today at the American Campus Classic in Austin, Texas.

Minnesota was led by Stephanie Samedy, who had 11 kills and hit .348, followed by Alexis Hart with eight and Molly Lohman with seven  (.545). Samantha Seliger-Swenson recorded her second double-double of the day when she had 34 assists, 11 digs, three blocks and one ace. In all, Minnesota had 12 student-athletes see action in the win.

Minnesota plays No. 5 Texas, tomorrow night at 8 p.m. The match will be televised on the Longhorn Network.

First Set: Minnesota capitalized on a 33.3 hitting percent to take a 25-20 win. After a kill by Jasmyn Martin, the Gophers took a 7-4 lead, which caused TAMUCC a timeout. A block from Samedy/Morgan placed the Gophers at a 12-9 advantage. The Gophers later took a 17-12 lead after Hart added her second kill of the set. It forced TAMUCC to call its second timeout of the set. Pittman added an ace for a 19-15 Gopher lead, while Morgan later added a kill for a 22-17 lead.

Second Set: The Gophers used a 5-1 run in the middle of the set to win it, 25-19. Corpus Christi held a 7-5 lead, but the Gophers came back and tied the set at 8-8. From there, the two teams traded points before a Samedy kill and an Islander attacker error put the Gophers up, 14-12. After the Islanders pulled within one at 15-14, the Gophers rattled off a 5-1 run as they lead, 20-15 and forced CC to call a timeout. A Samedy/Lohman block later pushed the score to 23-16, while Samedy added a kill and an overpass kill for a 2-0 Gopher lead.