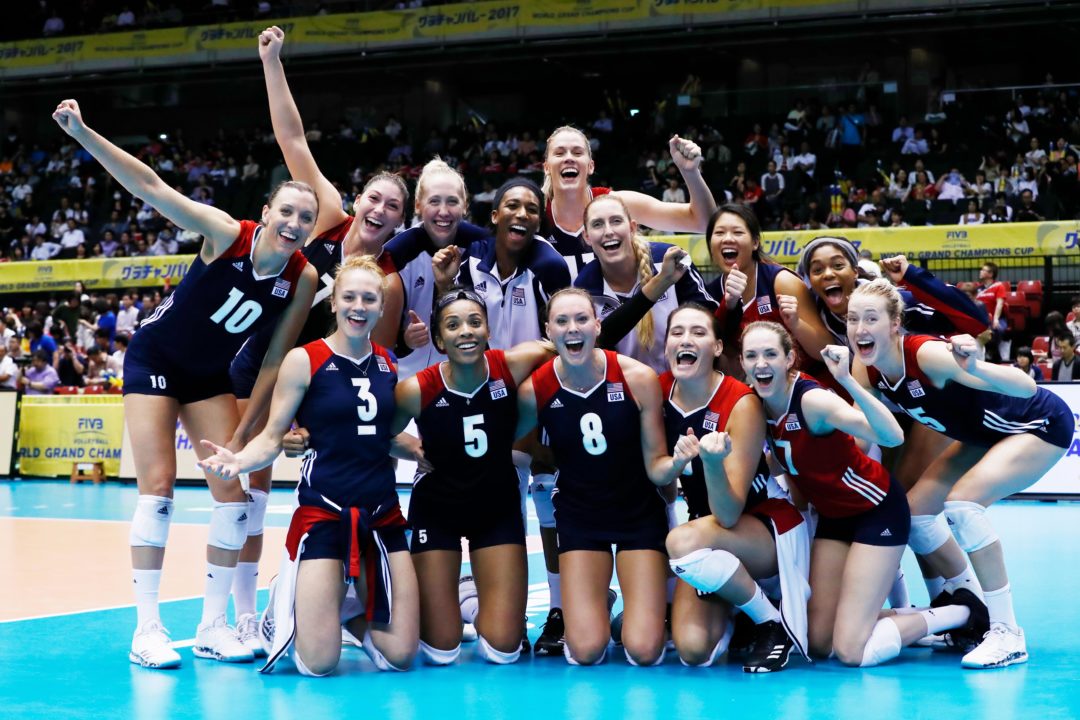 As the tournament moves over from Tokyo to Nagoya, Team USA will try to build on their win against Korea, while the Russian squad must win to threaten China's inevitable title. Stock Photo via FIVB

From Tokyo to Nagoya 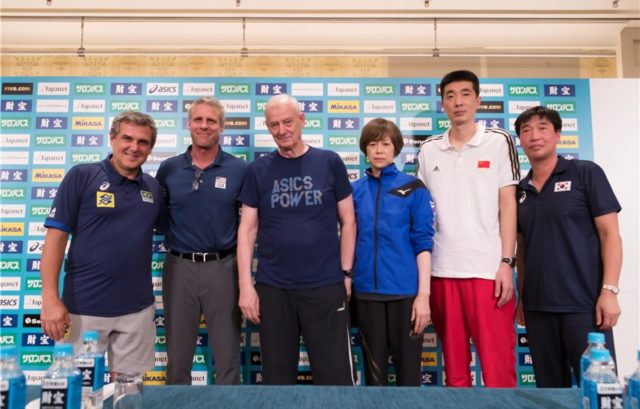 After two days of games in Tokyo, the tournament is moving to Nagoya for the last three rounds of matches, the first of which will get underway with a clash between USA and Russia. Here is what the six coaches had to say about their feelings for the last three days of play:

USA coach Karch Kiraly: We’re very happy to transfer here to Nagoya today and we are looking forward to playing against three very strong teams. It will be a wonderful test for us to see what skill level we’re at at this time.

Russian coach Vladimir Kuziutkin: As all of you are aware, we now have the second half of the competition and you know there are no easy games, not even one of them. All the matches will be full of surprises and we will continue to have some great volleyball games.

Brazilian coach José Roberto Guimarães: It’s great to be able to be here with the Brazilian team. We had two games in Tokyo and they were very difficult and played at a high level. In Nagoya, we will have three games and all will be difficult. We have a very young team, so it’s good to play against the world’s best and the world’s strongest. It’s a good opportunity for my young team.

Japanese coach Kumi Nakada: In Tokyo, many fans came to cheer for us and I want to thank them for that. I’m not sure I could meet their expectations, maybe because of my shortcomings, but in the next three matches we want to keep our challenger spirit and fight as one. Brazil is a different team from the World Grand Prix and they could very well change their system. It will be fiercely competitive and I want to use all my players. Some players have never played teams like this in their life and they are really feeling the significance of wearing the rising sun on their shirts. When the match starts, the feelings I had as a player come back to me, but it’s different. If I’m a player, I can do something about it. As a coach, I hope the players will do it.

Korea coach Hong Sungjin: Our team has mostly younger players and they gained a lot of experience in the Tokyo round. This will be an important part of our plans as we look towards 2020. I hope to recruit about three regular players from this young team for competitions next year. I hope we will learn many things in this tournament.

After two days of games in Tokyo, the tournament is moving to Nagoya for the last three rounds of matches, the first of which will get underway with a clash between USA and Russia. We are expecting this game to be fairly even. The teams’ most recent head to head battle came in the 2017 World Grand Prix in which USA prevailed in five sets, which already sets the tone of the squads’ parity. Also, Russia has never been swept in the Grand Champions Cup before since its debut in 1993, and we are not expecting it to happen now.

Team USA bounced back after their opening defeat to China with a 3-0 win over Korea, in which five players reached double figures: Jordan Larson (13), Rachael Adams (12), Lauren Gibbemeyer (12), Andrea Drews (11) and Kimberly Hill (11).

Russia ended a four-match losing streak in the Grand Champions Cup by beating Japan 3-1 in their last game. They can now win back-to-back matches in the competition for the first time since winning their last two matches of the 2001 edition (3-0 versus Korea and Japan). Russia’s last podium at a world level tournament came at the 2015 World Grand Prix (second). This year they finished in ninth place at the World Grand Prix.

Russia’s championship hopes rest on this game. As of right now, it is the only squad that can threaten China’s inevitable title. That is because Brazil and USA already played and lost to the Chinese squad, while Russia has not played them. Since this is a round robin tournament, and China absolutely won’t lose to either Korea or Japan, only a Russian win against the USA and China can change the inevitability of another Chinese conquest.

As China and Korea meet, the Chinese will be looking to remain the only unbeaten team in the tournament so far, while the Koreans will be aiming at winning their first victory or at least their first set in this edition of the competition, which we strongly believe won’t happen. China’s recent matches against Korea have been very one sided. They have met three times at the Grand Champions Cup before, with China winning all contests in straight sets. For comparison’s sake, China have lost at least one set against all other teams they have played multiple times at the Grand Champions Cup.

The squads’ most recent head to head battle came at the 2015 World Cup in which China won 3-1.The game will be a replay of the 2015 Asian Championship final, which China won in straight sets.

In total, Korea has won only three of their 22 matches so far at the Grand Champions Cup since its debut in the tournamet. Two of these three victories were five-setters. Korea has not finished on the podium of a world level tournament since their third place in the 1997 World Grand Prix. Thus, we are really expecting a massacre. Maybe things would fare differently if Korean Superstar Kim Yeon-koung was in uniform. But, without her playing, her squad really has no chance against the current Olympic champions.

Japan and Brazil, each with a 1-1 win-loss record so far, will both be looking for their second win of the tournament. This will be their sixth encounter in the history of the Grand Champions Cup. The teams’ most recent meeting came at the 2017 World Grand Prix in which Japan prevailed after five sets. We don’t expect this game to be so even this time around, as in the Grand Prix Japan had their full squad at hand, which is not the case for this competition. However, Japan did steal a set against Russia, so the following match may not be so one sided after all.

Japan finished seventh in the 2017 World Grand Prix, but managed to win the Asian Championship. Their last top-three finish at a world-level tournament was a second place in the 2014 World Grand Prix. Brazil’s defeat against China on their last match was only their second defeat in their last 17 Grand Champions Cup matches, the first since 2009. Brazil have only once lost back-to-back matches in the competition, as they lost their first two matches of the 2001 campaign (0-3 against Japan, 2-3 against Russia).