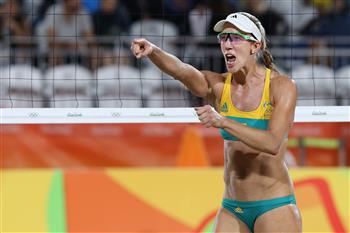 Australia's Louise Bawden has announced her retirement from beach volleyball at the age of 36.  Current Photo via FIVB

Australia’s Louise Bawden has announced her retirement from beach volleyball at the age of 36. Bawden is a three-time Olympian who started her career on the indoor side of the game before transitioning to the beach in 2009.

“After more than 20 years in volleyball it is with more than a touch of sadness that I share my decision to retire from international competition,” said Bawden.

Bawden’s first run at the Olympics was with the Australian indoor team at the 2000 Olympic Games in Sydney. She missed out on the 2004 and 2008 Olympic Games before making the move to the beach where she was named the World Tour’s Rookie of the Year in 2009. From there, Bawden competed in 91 international events, including the last two Olympic Games and the last four World Championships.

“While my career was not defined by the elusive gold medal, I am extremely proud of the progress I made as an athlete, the standards I held myself to, my commitment to learn and the reputation I built internationally as a hard worker and a fighter on the court,” said Bawden in a statement to beachmajorseries.com.

In her 10-year beach career, Bawden had just two partners, first with Becchara Palmer and followed up with Taliqua Clancy, who she played with up until the end of last season. The pair split up because Clancy said that “Bawden wasn’t committed to Tokyo 2020.” Due to injuries, she has played with other players but for short periods of time, like Nicole Laird to which the pairing won the 2017 Sydney 2-Star event.

Bawden had much success on the beach, with her and Clancy winning the 2014, 2015 and 2017 Asian Championships and also earned the bronze medal at the 2015 Porec 5-Star tournament.