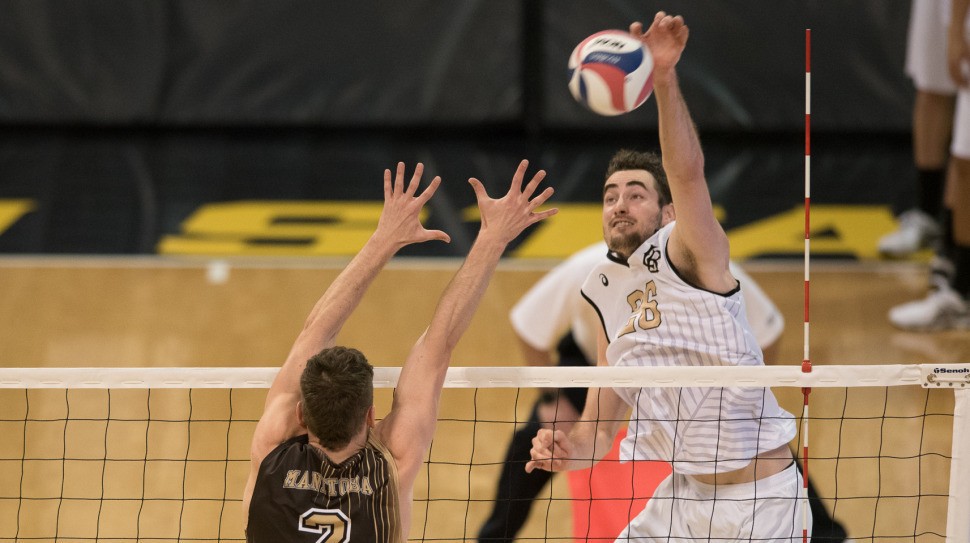 In Long Beach State’s first match of the year they swept Manitoba in an exhibition match.

Leading the Long Beach State offense was TJ DeFalco with 12 kills on a .500 hitting percentage, with Bryce Yould added seven hitting for .600 and Davis Cannon contributed seven kills and a match-best five aces.

TJ DeFalco led all scorers with 12 kills and hit .500 (12-3-18) in the contest, while Cannon and Bryce Yould added seven kills apiece for the Beach. Cannon turned in a solid performance as the junior opposite led the 49ers with six digs and five service aces. He also added two block assists and one assist, while hitting .294 (7-2-17).

Josh Tuaniga earned the start at setter and paced the offense with 32 assists, while collecting four digs, four block assists, three aces and one kill.

The Beach and Bison played through 10 ties and five lead changes in the first set with the final tie being broken by a kill off the hands of Lugo-Rodriguez who gave the 49ers a 19-18 lead. From there, Long Beach State took a 21-18 advantage forcing Manitoba to call for a timeout. Following the timeout, the Bison were able to pull within one (21-20), but the Beach ended the game on a 4-1 run to win the set by a score of 25-21.

In the second set, the Beach jumped out to a 15-8 lead as Cannon knocked down five aces on six serves. With Cannon at the service line, the momentum was in favor of the 49ers and they never relinquished their lead. Although the Bison tried to chip away, they could never come closer than three (20-17). Long Beach State did a solid job offensively in the frame as the Beach hit .562 and went on to win 25-19.

Long Beach State hit .400 in the third and final set as the 49ers knocked down 12 kills on 25 attempts, while committing just two errors. The Beach tied the game at 11-11 on a kill from Yould which sparked a 6-0 run as the 49ers took a 16-11 advantage and never looked back. LBSU held the lead for the remainder of the set and Matt Butler put the game away with a pair of service aces to end the set giving the 49ers a 25-18 victory and a 3-0 sweep over the Bison.

Long Beach State and Manitoba will meet again on Thursday, Jan. 5, at 1 p.m. in the Gold Mine for another exhibition contest.