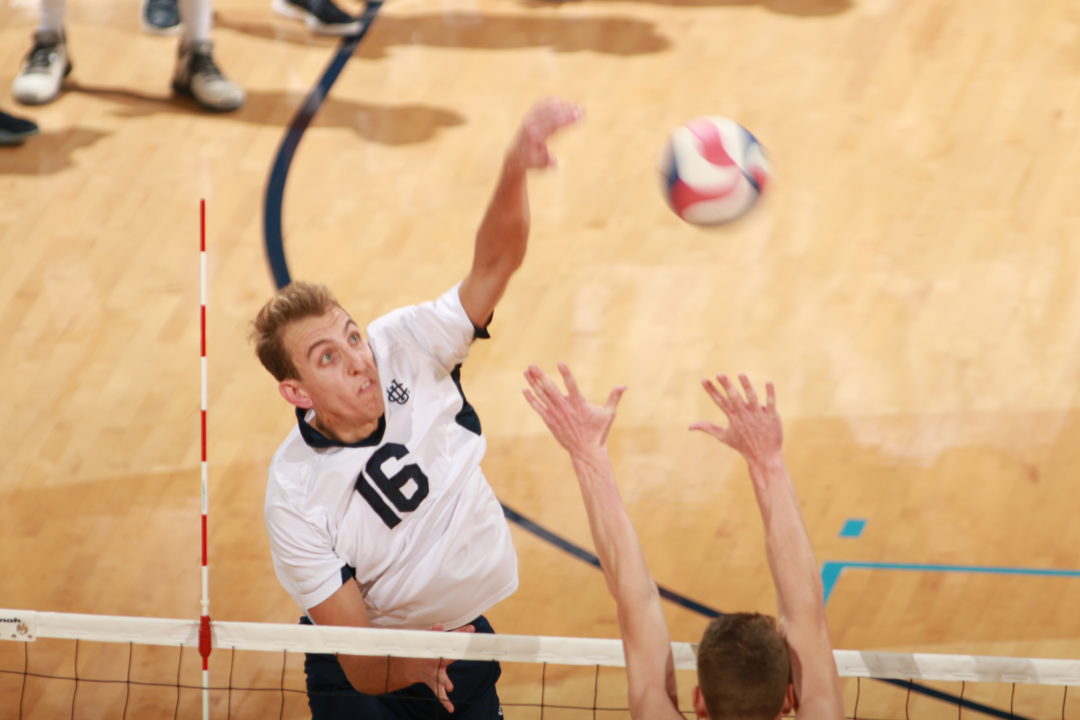 UC Irvine's floor defense and star options on offense led them to a 3-1 win in the Battle of Irvine with Concordia Irvine. Archive Photo via UC Irvine Athletics/Volleyball

IRVINE, CALIFORNIA – In a battle of the Irvines, it was the Anteaters of UC Irvine coming out on top of the Eagles of Concordia Irvine in four sets.

It was an interesting match to say the least, as none of the sets went down to the wire. Even in the one set of weakness for UC Irvine, they were held to a season-low 15 points for one game. They more than overcame it though by winning the other three by a combined 31 points.

Neither team had much edge in blocks (9-8 CUI) or aces (4-4), but the Anteaters continued to show their strong floor defense on the year by outdigging the Eagles (40-30). That, along with a more fluid offense and smooth second contact led to UC Irvine outhitting Concordia Irvine .248 to .088.

In the losing effort, Concordia Irvine saw big totals from Raymond Barsemian, who had a match high in kills (17) and aces (three) while hitting .233. He also tacked on three blocks and six digs. He got help from Hunter Howell (eight kills, .467), but the rest of the Eagles hit just -0.127 for the match.

It doesn’t change the fact that Concordia Irvine has had an impressive start after beginning the year unranked, as their early win at CSUN helps lift them up with losses to UCSD and now UC Irvine. They’ll look to rebound on Monday against Hope International University.

For UC Irvine, their start has been magnificent, but they will have an incredible test ahead this weekend as they host #3 BYU for a pair of high-caliber matches on Friday and Saturday.

Concordia struggled out of the gate, partly because of two UCI blocks and the Anteaters would hold an early 7-0 lead in the first set. The Anteaters hit .526 and would go on to win the set 25-13. Karl Apfelbach was dominant, hitting .750 (6-0-8).

The Anteaters continued to roll, taking the first three points of the second set. A kill by Joel Schneidmiller and a solo block by Stadick pushed the margin to 7-3. The Eagles would close to 13-11 on an ace and again at 14-12, but a kill by Apfelbach, a CUI attack that sailed out and a block by Matthew Younggren and Dante Chakravorti would move the cushion back to 17-12. A late 4-0 run which included three consecutive Anteater kills, two by JB Kam, gave UCI set point 24-18. Following a Concordia timeout, Apfelbach fired an ace to end the set 25-18.

UCI got back on track in the fourth set, leading 5-2 on a Schneidmiller kill then 7-4 on back-to-back blocks, one by Stadick and one by Schneidmiller and Younggren. UCI would score seven in a row, including two kills by Stadick to put the Anteaters up 19-9. The Anteaters would win 25-13.

NOTES: Schneidmiller has two double-figure kill matches, both a career-high 12 kills…Kam had three previous aces before unloading three against the Eagles…It’s the sixth time this season Apfelbach has recorded double-figure kills and sixth time he has lead the team in kills this season…Concordia’s 13 points in the first and fourth set, matched the opponents low for the season.

Hunter Howell held steady for the Eagles, recording a match-high five blocks while hitting .467 with eight kills. Raymond Barsemian had a season-high 17 kills, six digs and three aces. The reigning MPSF/Molten Offensive Player of the Week Chandler Gibb recorded his third double-double of the season as he collected 28 assists and 10 digs.

UC Irvine showed why they are a top ten team as they surged out to a 7-0 lead in first set. Concordia stopped the bleeding with a tap down on an overpass from Jonathan Predney putting them on the board. Both teams traded points for most of the set as it consisted mainly of kills and service errors. A service error by UCI made it 16-10 before the Anteaters went on a 9-3 run to close it out.

There was no cooling down the UCI hitters going into the second as they put themselves on top at 3-0. Three points from Barsemian brought the Eagles back into the set down 4-3, but consistent play from the Anteaters extended their lead to 8-3. Concordia crept back into it after Gibb dished out a crosscourt backset on his knees that led to a kill, making it 10-7. UC Irvine was able to extend the lead again, but Concordia gained momentum off of tough serving from Howell, resulting in an overpass kill by Gibb, who then teamed up with Alec Krilis for a block making it 18-16. However, the UCI hitters stayed hot as the Anteaters took the last four points of the set to win 25-18.

Concordia found their rhythm in the third when they bolted out to a 6-1 lead courtesy of four UC Irvine hitting errors, a Barsemian kill, and a crowd-pleasing block by Howell and Parker Maki. The Eagles expanded their lead to 10-2 before Barsemian served back-to-back aces, making it 12-2. The Anteaters chipped away at the Eagles’ lead as unforced errors brought the score to 15-7 before each team sided-out until 21-12. An out serve by UCI and a block by Howell and Predney sealed the set and extended the match.

Much of the Eagles’ offense was contained in the start of the fourth as the Anteaters’ block came alive. A service error by UCI followed by a Barsemian ace brought CUI within one at 5-4 before the teams continued to trade points. Midway through the set, UC Irvine went on a 7-0 run forcing two Concordia timeouts. The Eagles responded with a 4-1 run from two Anteater errors, a kill by Barsemian and a block by Howell and Logan Glave. However, UC Irvine kept the momentum the rest of the way as they took the last five points, ending it at 25-13.

Concordia falls to 2-2 on the season while UC Irvine improves to 7-1. The Eagles will host an NAIA opponent in Hope International on January 29th before heading on the road to Long Beach State on February 2nd.