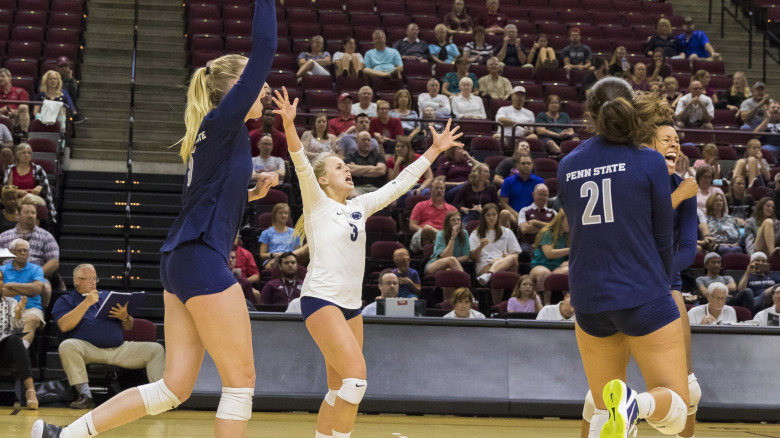 #5 Penn State took the court by storm with a four set win over #1 Stanford behind a triple-double by senior setter Abby Detering. Current Photo via John Gutierrez-USA TODAY Sports

#5 Penn State took the court by storm with a four set win over #1 Stanford behind a triple-double by senior setter Abby Detering. The Nittany Lions also used a well-balanced offense to take down the Cardinals, while Stanford relied heavily on sophomore Katheryn Plummer.

No. 5 Penn State takes down No. 1 Stanford in a 3-1 battle. #WEARE #PSUWVB pic.twitter.com/wrrFojeAKL

The first set of the match was led by Stanford, with Penn State playing catch up late. Stanford led at 20-16 when the Nittany Lions pulled out all the stops to go on a 5-0 run to take the 21-20. A Plummer kill tied things back up at 21 all, but a service ace gave the Nittany Lions the 22-21 lead. Stanford went on a 2-0 run to take the 23-22 lead but couldn’t keep the momentum going, allowing Penn State back in to win 26-24 on a Nia Reed kill.

The second started with a back and forth battle until 15-15 when Penn State began to break away to take the 25-17 second set win to go up 2-0. Stanford took the third set after a tight beginning to the third set but broke away midset.

Penn State took a lead in the fourth set and were able to keep it throughout to keep Stanford out of reach. The Nittany Lions ended the match on a Haleigh Washington and Reed block, 25-19 to complete the upset.

Detering produced a triple-double with 11 kills on a .455 hitting clip, 23 assists and 10 digs while also adding four blocks to her tally. Simone Lee added 11 more kills while Ali Frantti and Washington put down 10 kills with Frantti picking up 14 digs for a double-double. Weiskircher also produced a double-double with 22 assists and 11 digs while White picked up 20 digs.

For Stanford, Plummer put down 27 kills on a .440 hitting percentage with 11 digs for a double-double. Michaela Keefe added another 15 kills while Jenna Gray dished out 54 assists, six digs and two blocks.

The Nittany Lions were led by dual-threat senior Abby Detering (Mentor, Ohio). Detering, who had been playing both right side and setter, finished the evening with a career-best 11 kills, adding 23 assists, and 10 digs for her first career triple-double. She also added four blocks.

Frantti added 14 digs for a double-double, while Washington was a wall at the net, tallying a game-high seven blocks.

Bryanna Weiskircher (Loves Park, Ill.) also recorded a double-double as the setter dished out 22 assists and scooped up 11 digs. She also added on two aces.

Plummer finished with her second double-double of the season, adding 11 digs to her 27 kills. The Aliso Viejo, California native hit a team-high .440.

It was the first loss for the Cardinal since a five-set setback to UCLA on Nov. 12, 2016. Stanford will get another look at Penn State as the two teams play again on Sept. 9.

Stanford will face Texas A&M on September 3 at 9 a.m. PT in Reed Arena. The match will be streamed on SEC Network (+).