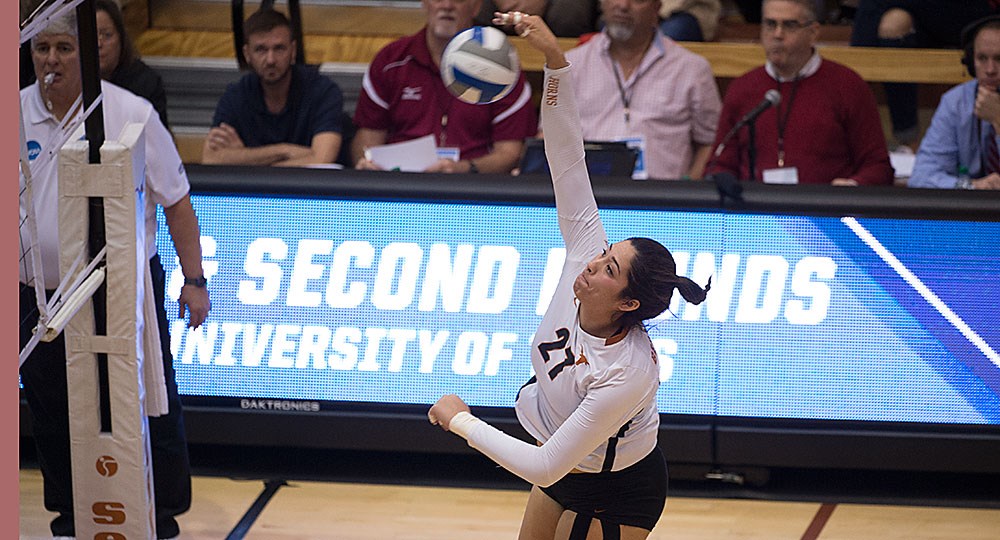 No. 6 Texas snapped Texas State's 5-match win streak, when it opened its home season with a sweep Thursday in Austin, Texas. Current Photo via Texas Athletics

Since dropping a 4-set match on the road to then-ranked No. 6 Wisconsin, 6th-ranked Texas has registered two straight sweeps. The first came against High Point last Sunday, and the second was earned tonight inside of Gregory Gymnasium in Austin, Texas. The victory snaps a 5-match win streak for the Texas State Bobcats.

The Longhorns outhit the Bobcats, .379 to .218, in the match, which was their season-high both for offensive efficiency. They also served up a season-best 9 aces to claim the victory in front of 3,309 fans.

In the first set, Texas used a 6-1 stretch to establish an early advantage but the Texas State battled back to knot the score, 12-12. The Longhorns responded with a 5-1 push and held the edge for the 25-18 win.

Texas hit at a .444 clip en route to its 25-19 set two win. Both teams battled for control early until the Longhorns took over with an 11-5 stretch midway through to take the lead.

In the third set, the Longhorns jumped ahead 6-1, but the Bobcats worked their way back into it and tied the score, 10-10. Texas rattled off 5-straight scores to pull away and never surrendered its lead to secure the sweep with a 25-19 victory.

Hear what @yaaziebg had to say about tonight’s win 🤘 pic.twitter.com/ou52hncogM