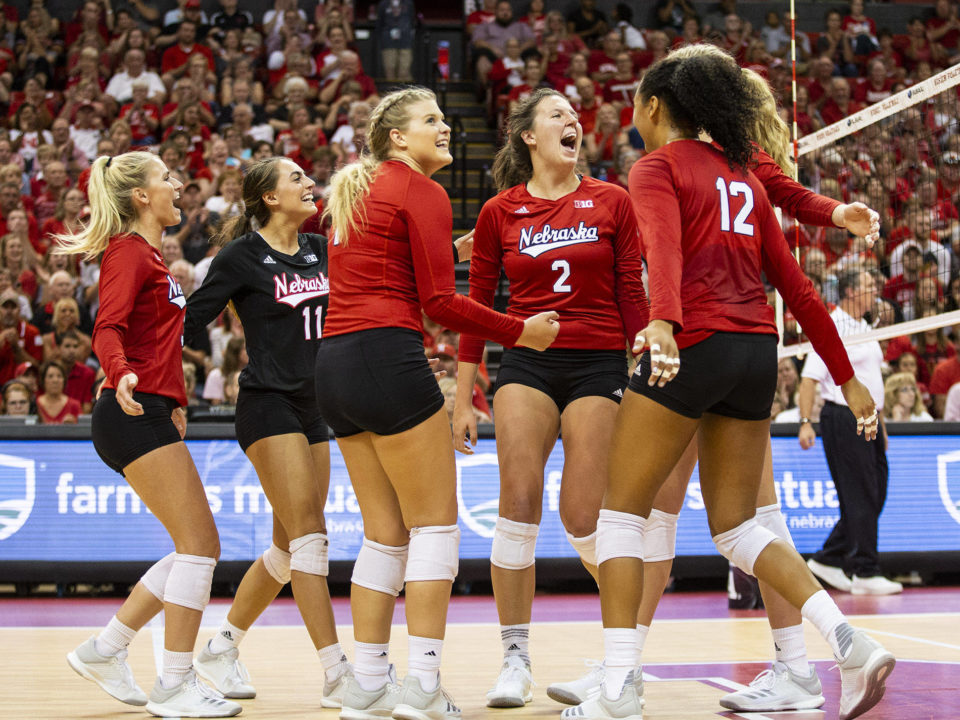 Nebraska kept its perfect series record against Creighton alive with a five-set comeback in Omaha on Thursday in front of an NCAA regular season record crowd of 14,022.  Current Photo via Nebraska Athletics

Nebraska was 17-0 against Creighton coming into the night and had never allowed the Bluejays more than one set victory in those contests.

All that changed, however, on Thursday night as Creighton took a 2-0 lead in the match, capitalizing on Husker miscues and a stellar all-around effort by senior outside hitter Taryn Kloth. Through the first two stanzas, Kloth was on a tear, notching 15 kills and three stuffs, while hitting at a .600 clip. Meanwhile, Nebraska aided the Bluejay effort with 11 hitting errors, five service errors and two blocking errors.

From there, however, the Huskers turned it around and pulled off the comeback to deny Creighton once again.

Nebraska jumped ahead 6-1 in Set 3 and never looked back in a 25-18 win. Nebraska, which hit .222 and put up four blocks in the stanza, did not allow Creighton closer than three the rest of the way. The Bluejays lost their offensive footing, hitting just .023 after a .457 effort in Set 2.

Nebraska worked its way to a 20-14 lead in Set 4 and held off a late Creighton run for the 25-22 victory to force a decisive fifth set. The Huskers hit .265 and held the Bluejays to a .162 effort in the stanza. Creighton was within two at 24-22, thwarting two Nebraska set-point tries and forcing John Cook to all timeout. Mikaela Foecke downed her 20th kill to end it.

In the decisive fifth set, Nebraska led 8-5 at the changeover after a block and a kill by Foecke. A stuff by Foecke and Callie Schwarzenbach gave the Huskers their largest lead at 9-5. The Bluejays were within one at 10-9 after a kill and a block by Kloth. The Huskers countered with three in a row, including back to back aces by Foecke, forcing Creighton to burn both of its timeouts. Kloth notched her career-high 26th kill to make it 13-10, but a kill by Jazz Sweet and an ace by Kenzie Maloney wrapped up the comeback.

Key Stats: Mikaela Foecke paced the Huskers with a 25-kill, 13-dig double-double to go with team highs of five blocks and four aces. Capri Davis (18) and Jazz Sweet (12) followed offensively. Kenzie Maloney was tops on defense with 25 digs, while setter Nicklin Hames turned in 11 saves to round out a double-double with 56 assists.